Brazil and United Kingdom – current and future perspectives on peacekeeping 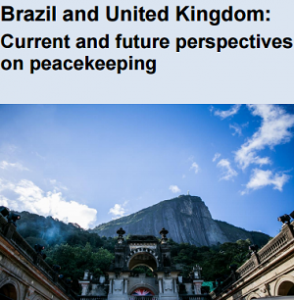 The British Embassy in Brasilia and the Igarapé Institute co-hosted an informal event on current and future perspectives on United Nations (UN) peacekeeping. It was held in Rio de Janeiro, on 11 August 2016, attended by 13 professionals among diplomats, military and civil society (10 Brazilians and 8 women). Participants raised several topics on Brazilian participation in UN peacekeeping missions, and the conversation was organized around three informal sessions: (1) The future of peacekeeping; implementing the HIPPO report; and the London conference (2016); (2) Brazilian engagement in UN peacekeeping; and (3) Women, peace and security. The main ideas shared by the participants, including key challenges and opportunities for Brazil, are summarized in this brief.