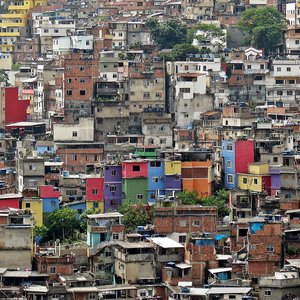 RIO DE JANEIRO — A robotic snowman danced on the tailgate of a pickup truck strung with Christmas lights as it passed two shirtless boys holding handguns and short-range radios. Inside an evangelical church a few steps away, children played “Noite Feliz,” the Portuguese version of “Silent Night,” on their violins, flutes and trumpets.

It’s a bittersweet holiday season for the 130,000 people who live in Complexo da Maré, the front line of a battle between drug gangs and police who want to pacify the largest and most violent of Rio’s favelas, poor urban communities that began as shantytowns. Until June, thousands of federal troops occupied the 16 communities in Maré, at a cost of $444,000 a day, to prepare for the installation of a Pacifying Police Unit (UPP), raising the prospect of a future without the ruthless drug gangs that have ruled the area for three decades.

But after the army left, “the gangs returned to business as usual within two hours,” according to one community leader, whom Al Jazeera America is not naming to shield him from possible repercussions. The UPP never arrived. Now police cars sit at the entrances to Maré, but inside the traffickers are undoubtedly in control. Tension abounds, and many inhabitants are reluctant to talk.

In the Nova Holanda district of Maré, the residents’ association president, Gilmar Rodrigues Gomes, chose his words carefully. Last year a counterpart was killed, apparently by a gang, after repeatedly speaking out in favor of the occupation.

“Pacification cannot do anything for us,” said Gomes. “The community does not accept pacification. We would prefer basic services like sanitation and reliable electricity and water.”

The mood is noticeably tenser than when Al Jazeera visited in April 2014. Then, many residents were cautiously optimistic, although all were well aware that the traffickers still lurked in the community.

“It’s been a tough end to the year,” said Ricardo Mirapalheta, 53, who runs a local children’s orchestra. “The economic crisis has also hit many people here hard. For everyone, there is a long road ahead.”

Senior police commanders have admitted that the army occupation of Maré achieved little, and some commentators now doubt the state can ever control such large favelas where gangs are so deeply embedded.

Pacification was hailed as innovative community policing when it was introduced in 2008 in smaller favelas such as Vidigal and Babilonia, which are less critical to the gangs and have postcard views over the city’s beaches. Its success was due in part to specially trained officers who helped temper the brutal reputation of the state’s military police. Crime rates, including homicides, plummeted. Since then, 38 UPPs have been installed across the city.

But an ambitious move to expand pacification to larger favela complexes where gangs are stronger relied on a broader range of police officers without such specialized training.

The disappearance of bricklayer Amarildo de Souza from the Rocinha favela in 2013 marked a turning point in public perception of pacification. Twenty-five UPP officers were charged with involvement in his torture and murder, although his body has not been found.

In other supposedly pacified favelas, the war with drug gangs has continued. In Complexo do Alemão, residents this year counted 100 consecutive days of shootouts between gangs and police. A 10-year-old boy, Eduardo de Jesus, was among those killed by police, who said they believed he was armed. Many police officers have also died. The shooting of three officers in the Jacarezinho favela in December brought the number of slain UPP officers in Rio so far this year to 12.

“The state will never control the most difficult areas such as Maré,” said security analyst Robert Muggah of the Igarapé Institute, a Brazilian think tank that focuses on security and development issues. “It was optimistic if not flawed to say pacification could be applied to all these diverse, fragmented communities.”

The state launched a program earlier this year to retrain thousands of UPP officers to better deal with the situations they face. Police are offered the option of a smaller weapon, and only one officer who has undergone the training has been killed in action, said José Mariano Beltrame, the state security secretary for Rio de Janeiro.

He denied that certain communities are out of reach of the authorities. “We will pacify all the favelas in Maré,” he said. “It is difficult and complicated, but I am sure that we will eventually have 1,500 police there.”

“Some of these favelas have been under gang control for 40 years. We were never going to resolve all of those problems in eight,” he added.

With oil revenues plunging, Rio’s state security budget has effectively fallen by as much as 25 percent this year, analysts say. But according to Beltrame, the UPP budget is protected from cuts.

In Santa Marta, a favela that sits on a hillside beneath the Christ the Redeemer statue, in the city’s wealthy South Zone, police officers laughed as they prepared for a street party to celebrate seven years since the community became the first in the city to receive a UPP.

Since 2008, Santa Marta has been the model for the pacification program. No murder has been officially recorded in the favela since then, and many of its 6,000 residents say they support pacification. The complex, which has a brightly painted entrance and a statue to commemorate a video Michael Jackson filmed there, is popular with foreign tourists.

Nevertheless, small cracks show. A teenage boy with a short-range radio, often used for gang communications, stood at a vantage point next to the favela’s cable railway. On a wall behind him was recent piece of graffiti extolling the Red Command, the dominant faction before pacification.

“We still have traffickers here. There are still houses that we cannot enter without authorization,” said Tatiana Lima, the commander of the Santa Marta UPP. “There is still a market for drugs. But mostly the traffickers here are under 18 and do not cause us problems.”

In May, Santa Marta suffered its first shootout since pacification, with an attack on the UPP base. In October, Evelyn Araújo, 14, and her brother Eliel, 18, disappeared from the favela. Detectives are investigating if they were kidnapped and murdered by gang members.

Still, many residents Al Jazeera spoke with this month said pacification has improved the favela, although increased security has led to rent increases and gentrification.

“So many people have left that we are no longer a community,” said Ana Paula da Cruz, a 40-year-old mother of three. “People no longer help their neighbors.”

Others worry that Santa Marta and other fashionable favelas are a facade for the authorities.