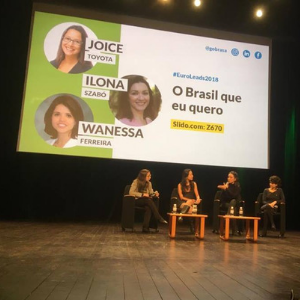 Ilona Szabó, Igarapé’s executive director, was one of the main speakers at the EuroLeads Brasa (Brazilian Student Association) European Leadership Summit. The Leadership Summit is one of the biggest gatherings of Brazilian students in Europe. Ilona delivered a talk called “O Brasil que eu quero” [The Brazil I want]. She was joined by Joice Toyota, co-founder of Vetor Brasil, and Wanessa Ferreira, manager at Bain & Co.

Brasa is a nonprofit organization that connects Brazilians who study abroad. This year’s focus was on “jeitinho brasileiro” – highlighting the challenges and response to corruption and illegal activity in Brazil.

See a video of the event here