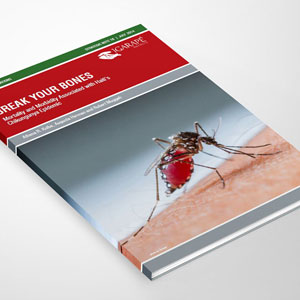 In December 2013, chikungunya, a debilitating dengue-like virus spread by mosquitos, was first diagnosed in the Americas on the island of St. Martin. The disease quickly spread to neighboring islands and on May 7 the Haitian Ministry of Health confirmed 14 cases. A week later that number had increased to more than 1,500. Within two weeks of its purported arrival, it had risen to more than 5,500 cases. Epidemiologists report that chikungunya is likely to keep spreading.

Although most Caribbean nations were able to control and respond to the outbreak, chikungunya has been merciless in Haiti. Lack of basic infrastructure, poor mosquito control measures, and deep social and economic disparities hampered prevention and treatment efforts. Shortly after the outbreak was announced, an Igarapé Institute-led research team was dispatched to conduct a nationwide survey to determine the risks and protective factors for infection with chikungunya. The Institute has coordinated similar assessments of spread of cholera and food security in the wake of natural disasters, as well as violence and victimization.

Between 19-30 May 2014, a total of 2,807 randomly sampled households (accounting for 13,760 individuals) from all ten geographic departments were interviewed, as were 446 randomly sampled tourists departing the Port-auPrince airport. An additional survey of market conditions was conducted in Port-au-Prince and the seaside town of Jacmel. A qualitative component to the study included five focus groups (ten participants in each group) and 27 in-depth interviews. The qualitative interviews and focus groups were conducted in Jacmel and the greater Port-auPrince area.