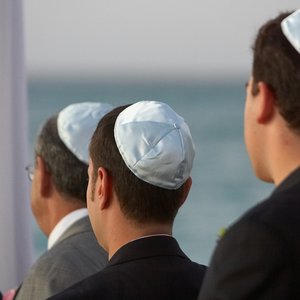 “In Israel, we don’t feel threatened with imminent violence. The feeling of security with our police and army plus unity of the population reinforces the generalized feeling that we are not alone.”

For four years, Ilana Lermer Kalmanovich rode a hot and crowded bus three hours each day to reach the Federal University of Rio de Janeiro, where she was pursuing degrees in physical education and nutrition.

Police raids into nearby slums, or favelas, often blocked the freeway, and stray bullets from gun battles with criminals were a constant threat. Even on the Federal University campus, the oldest and among the most prestigious in Brazil, Kalmanovich felt unsafe. Robberies were commonplace and, every now then, corpses were found in the nearby woods.

So in 2007, Kalmanovich moved to Israel. She had spent a whole year there a decade earlier on a youth movement program and fallen in love with the country. And though she holds German citizenship and could have built a new life for herself in Europe, there was never any doubt she would make her home in the Jewish state.

“Israel is the place where I feel at home, happy, among my people,” Kalmanovich told JTA. “We say ‘Shabbat shalom’ to the bus driver, to the garbage man, to the sales clerk. Everyone shares mostly the same social and economic level. We all celebrate the same national holidays. It’s like living in a huge kibbutz of 8 million people. Here I am the rule, not the exception.”

Kalmanovich is not alone. Immigration to Israel, or aliyah, from Brazil has more than doubled in the past four years, from 191 in 2011 to over 400 so far this year. The average growth in aliyah for all of Latin America in the same period was just 7 percent. Though it has approximately half the Jewish population of neighboring Argentina, Brazil has sent more immigrants to Israel for two years running. An estimated 120,000 Jews live in Brazil.

“They seek a better future,” said Gladis Berezowsky, 58, who helps run Beit Brasil, a nongovernmental organization based in Israel established in 2014 to assist Brazilians seeking to move to Israel.

Brazil, a nation of 200 million, is facing its steepest recession in a quarter century, with the economy expected to shrink by almost 2 percent this year – down from more than 7 percent GDP growth in 2010. The Brazilian real has shrunk 138 percent compared to the American dollar in the past five years and the inflation rate has edged up to 10 percent.

The country is also one of the bloodiest on earth, with more than 58,000 Brazilians dying a violent death in 2014.

“More people are killed every year in Brazil through intentional violence than anywhere else on the planet, including most of the world’s war zones combined,” said Robert Muggah, a research director of a Rio-based think tank that studies the intersection between violence and the drug trade.

“The absurd violence in Rio was postponing our plans to have children,” said Silvia Brafman, 33, who moved from Brazil’s second-largest city to Haifa in late October with her husband. “The high unemployment rate and lack of opportunities were the second reason to head for Israel. The current stabbing wave here does not scare us at all. What really frightens me most is the language, which can delay my entering the job market.”

Fabio Erlich, 33, hasn’t had that problem. Erlich, who moved last year with his wife and three daughters to the central Israeli city of Modiin, secured jobs at two Jerusalem yeshivas before he arrived with help from Brazilian friends who were already established in the country.

“We wanted to give our children a better quality of life in the educational, social and religious fields,” Erlich said. “Israel allows you to be a Jew with no limitations, not only in the outside but mainly deep within. Finding a job in Israel made our big Zionist dream come true.”

Brazilian Jews have traditionally boasted a comfortable upper-middle-class life, but things are changing. Several Jewish day schools have merged or are in the process in order to survive, while administrators at some of them say the number of scholarship applications has never been higher.

“We have seen a 100 percent rise in requests recently,” said Yehoshua Goldman, the chief Rio representative of Chabad, which runs Lar da Esperanca (Home of Hope), an organization for Jews in financial need.

Despite the economic slowdown, real estate prices have nearly tripled in some parts of Rio in the past five years. Carlos Cohen, 36, a skilled IT specialist, could not afford the exorbitant rents, so he found an apartment in a favela near his office. When his daughter was born, Cohen realized he needed to get out.

“The high-tech market here is very vibrant,” said Cohen, who moved to the coastal city of Netanya with his family in 2012. “You only remain jobless if you want. We are proud to call this place ours, where we can truly put our citizenship in practice. Urban violence here is nearly zero, the safety feeling is absolute. We now can finally raise our family in a better place.”

For Martin and Michele Teitelbaum, being robbed in broad daylight in Higienopolis, an upscale and heavily Jewish neighborhood of Sao Paulo, Brazil’s largest city, was the last straw. In 2010, they took their three children – ages 2, 5 and 7 – and headed for Raanana, a city in central Israel with a large population of immigrants from Europe and the Americas.

“In Brazil, I was merely one more trying to survive,” Martin said.

“Life was sort of superfluous there, with many inverted values,” Michele added. “Here in Israel we value what must be valued.”

Psychologist Rita Cohen Wolf is a neighbor of the Teitelbaums in Raanana, where she settled in 1977 after she had been robbed eight times in Brazil. The last time, she had a gun pointed at her head.

In 2014, Wolf posted an open letter to President Dilma Rousseff on Facebook in which she criticized the violence in Brazil. She was astonished to see it republished in the Brazilian press.

“In Brazil, violence is felt every day,” Wolf told JTA. “In Israel, we don’t feel threatened with imminent violence. The feeling of security with our police and army plus unity of the population reinforces the generalized feeling that we are not alone.”