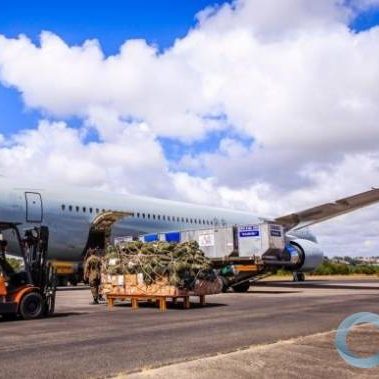 Brazilian troops landed in the Caribbean country in December for another six-month mission.

The 25th Contingent of the Brazilian Infantry Battalion (BRABATT) operates in the country as part of the U.N. Stabilization Mission in Haiti (MINUSTAH). For the next six months, 850 Brazilian soldiers will help maintain security in the Caribbean nation.

In addition to supporting the National Police of Haiti, soldiers face the challenge of supporting humanitarian assistance efforts in the country devastated by Hurricane Matthew, which swept through in October 2016. The official toll stands at 546 dead, 128 missing, and 175,000 people displaced. According to U.N. data, 1.4 million people were affected, and 800,000 still need humanitarian aid.

Brazil’s MINUSTAH contingent is made up of 639 soldiers from the Army, 181 sailors from the Navy, and 30 airmen from the Air Force. All hail from the northeastern region of the country. The Brazilian Air Force is responsible for transporting the troops. According to the leadership of Peacekeeping Operations of the Brazilian Ministry of Defense, the service members are rebuilding houses and roads destroyed by the hurricane and providing protection for convoys distributing food to the population.

Part of BRABATT operates in the capital, Port au Prince, in the western region of the country where the General Bacelar Base, headquarters of the Brazilian Battalion, is located. Another BRABATT company operates in the area around Cité Soleil. According to a press release from the Brazilian Ministry of Defense, the service members are conducting daily motorized and foot patrols, and are present along the main roads and avenues.

Marine Corps Second Lieutenant Débora Ferreira de Freitas is part of the Brazilian contingent in Haiti. She is the first female combatant of the Brazilian Armed Forces to join a troop on a mission of peace. For her, a woman’s presence facilitates contact with the community in the area of operations. “Especially in schools, hospitals, or during the patrols on the street, I feel that there is a greater ease of interaction when there is a female figure on site,” said 2nd Lt. Débora.

Difficulty communicating with a population that mainly speaks Creole or French, and the daily coexistence with extreme poverty are some of the obstacles the service members have encountered. “The adaptation to the local culture and the longing of family life is what makes it more difficult for the mission”, said 2nd Lt. Débora. Regardless of the challenges, the experience of working in another country, and the opportunity of sharing with armed force members of different nationalities are very rewarding, she said. “It is an honor to participate in this mission.”

From 1947 to 2015, Brazil deployed 48,000 service members on 47 U.N. missions, according to a report by Eduarda Hamann, a researcher at the Igarapé Institute. The report also showed that the number of Brazilians taking part in peacekeeping missions increased considerably in the past 15 years. In 2000, Brazil participated in three missions. Today, the country is present in nine — a 300 percent increase, with 1,300 service members deployed in Portuguese-speaking countries, such as Angola and East Timor, as well as in Lebanon, with the largest portion being in MINUSTAH.

According to the press release, Brazil’s participation in peacekeeping missions is a very useful instrument of foreign policy. “In addition to showing that we are meeting our global commitments, it contributes to strengthening our relations with countries that are of particular interest to Brazil’s foreign policy, projecting our country prominently on the world stage.”

Special training is necessary to participate in this type of mission. The Brazilian troops who make up BRABATT 25 underwent medical and psychological training, as well as basic training for peacekeeping operations. These troops also participated in a number of training workshops, executing operations similar to those performed by Brazilian soldiers in Haiti. They were also trained during the Advanced Peacekeeping Operations Exercise conducted by Brazil’s Joint Center for Peacekeeping Operations.

When members of the 25th Contingent of BRABATT embarked on their mission from Recife Air Base in the state of Pernambuco in late November 2016, the crew of Corsário Squadron’s Boeing 767 (2nd Squad of the 2nd Transportation Group of the Brazilian Air Force) commemorated the unit’s return to flight operations. The squadron was inactive for three years because of a lack of aircraft after the KC-137 tanker-transport planes were decommissioned. It resumed operations in July 2016.

According to Corsário Squadron commander, Lieutenant Colonel Luiz Eduardo Ferreira da Silva, “transporting troops to Haiti reiterated the unit’s mission, which is to conduct air logistics transport flights.” This air unit was also responsible for transporting law enforcement and public safety troops who made up the Security Forces in Rio de Janeiro during the Olympic and Paralympic Games.

The arrival of the C-767 plane boosted their strategic operations by increasing transport capacity for cargo and passengers over longer distances and at a faster speed. To operate the plane, squadron pilots received hands-on training. Classes blended theory with flight simulations, as well as training in similar aircraft. “Our crews operate the KC-137 aircraft, which is the military version of the Boeing 707. That is why it was necessary to get everyone familiarized with the Boeing 767 (C-767), a more modern plane than the previous one,” explained Lt. Col. Luiz, adding that the ground crews were also familiarized with the requirements of the new aircraft.

The Corsário Squadron was established in 1968, and is headquartered at Galeão Air Base in Rio de Janeiro.