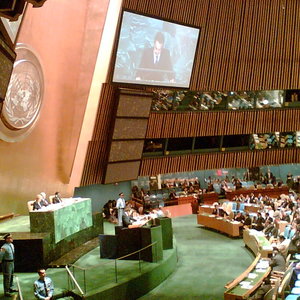 Former Presidents of Colombia, Mexico, and Switzerland together with Sir Richard Branson, US Former Federal Reserve Chair Paul Volcker and members of the Global Commission on Drug Policy call for reducing the harms caused by failed drug policy

On Thursday April 21 – the last day of the United Nations General Assembly Special Session (UNGASS) on drugs – several members of the Global Commission on Drug Policy will hold a press conference in New York. The Global Commission will evaluate the outcome of the UN meeting and call for concrete steps to ensure more effective drug policy reform in the years ahead. The UNGASS is taking place in New York from April 19-21 and is the first such gathering of governments in 18 years.

“Globally, we’re wasting too much money and precious resources on criminalizing people and sending them to jail when we should be spending this money on helping people – through proper medical care and education,” said Global Commission Member Sir Richard Branson. “From the perspective of an investor, the war on drugs has failed to deliver any returns. If it were one of my businesses, I would have shut it down many many years ago.”

Commissioner and former President of Switzerland, Ruth Dreifuss also notes that “many countries are already successfully adopting innovative harm reduction and treatment strategies such as needle exchange, substitution therapies, heroin prescription and safe consumption rooms”. She adds that “for these efforts to be truly effective, governments must decriminalize the use of drugs for personal use.”

WHAT:  Live press conference with leaders of the Global Commission on Drug Policy. LiveStreaming will also be available here.

WHEN: Thursday, April 21, 08.30am EDT. Breakfast and coffee available starting at 8am.

The Global Commission is urging the United Nations and all member states to adopt a people-centered approach to drug policy. This means putting health, safety and human rights first. Drawing on evidence-based policies from around the world, the Commission is calling on governments to:

The Global Commission believes the international drug policy regime has failed to achieve its original (and unrealistic) objectives of eradicating drug production and consumption. It has also generated alarming social, economic, political and health problems around the world. As former Presidents of Brazil, Colombia and Mexico noted in a recent Los Angeles Times op-ed: “outdated drug policies around the world have resulted in soaring drug-related violence, overstretched criminal justice systems, runaway corruption and mangled democratic institutions.”

Over the past two decades many countries have started taking matters into their own hands. For example, Switzerland opened safe consumption rooms and offers maintenance and heroin assisted therapy in order to allow users to have a more healthy and balanced life. Portugal decriminalized the use of all drugs in 2001, with significant crime prevention and public health benefits including decreasing rates of HIV. Cannabis clubs have sprung-up around parts of Spain, and Uruguay has regulated its cannabis market from production, to distribution and sale.

Meanwhile, the U.S. is pioneering different approaches to regulating marijuana. Already 23 states plus Washington, D.C. have regulated marijuana for medicinal purposes; and four states (together with Washington, D.C). have regulated marijuana for recreational purposes. There is now unprecedented debate among elected officials, including President Obama, about how to transform drug policies to reduce mass incarceration in the U.S. What is more, Canada and Mexico are also exploring the regulation of marijuana for medical and personal use, driven in large part by high-levels of violence and favorable public opinion.

Other quotes from members of the Global Commission on Drug Policy:
“We are driven by a sense of urgency,” says Fernando Henrique Cardoso, former President of Brazil and Chair of the Global Commission.  “The current system is not working and change is necessary and already underway around the world.”  He also observes that “unless governments start acknowledging their flawed emphasis on ‘the drug problem’ as opposed to the ‘problematic’ way they deal with drugs, then the health, human rights and well-being of mankind will suffer.”

“I believe that drugs have destroyed many lives, but wrong government policies have destroyed many more,” said Kofi Annan, Chair of the Kofi Annan Foundation and convener of the West Africa Commission on Drugs.  “The widespread criminalization and punishment of people who use drugs, the over-crowded prisons, mean that the war on drugs is, to a significant degree, a war on drug users – a war on people. Prohibition has had little impact on the supply of or demand for drugs.”

“Health-based approaches to drug policy routinely prove much less expensive and more effective than criminalization and incarceration,” said former President of Mexico Ernesto Zedillo. “Decriminalization of drug consumption is certainly crucial but not sufficient. Significant legal and institutional reforms, both at the national and international levels, are needed to allow governments and societies to put in place policies to regulate the supply of drugs with rigorous medical criteria, if the engines of organized crime profiting from drug traffic are to be truly dismantled.”

“Harm reduction, treatment and prevention represent only half of the way to dealing responsibly with drugs in our societies”, says Ruth Dreifuss, former President of Switzerland. “Regulating the whole chain, from the production to the retail of drugs, allows to rollback criminal organizations, secure quality standards and protect people’s life, health and safety.”

“The time has come for the international community to acknowledge the evidence, call for and deliver evidence-based harm reduction strategies. Scaling up these programs where they are not yet available or are not implemented at scale is a public health imperative” said Commissioner Michel Kazatchkine, who is also the UN Secretary General’s Special Envoy on HIV/AIDS in Eastern Europe and Central Asia.