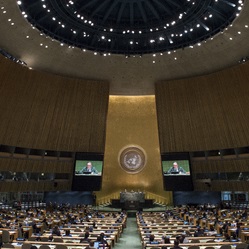 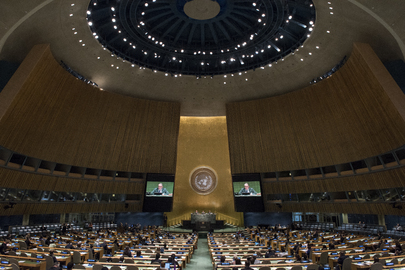 In the 19th century Max Weber, a keen student of purpose-driven bureaucracies, hinted that institutions sometimes change their missions even when their original objectives are deeply embedded within founding charters and mission statements.  In international affairs, few organizations can attest to this tendency towards inertia better than the United Nations, which was launched with the goal of avoiding the horrors of yet another world war.  Despite this clearly set mission, conflict prevention was relegated secondary status as Cold War geopolitics, and then post-Cold War securitization, reinforced a reactive rather than preventive approach to peace and security.   In addition, as the UN structure became more complex and compartmentalized, overcoming lack of coherence became a central challenge. Moving any organization away from this kind of deep-set path dependency and back to the original mission, even as it faces a fast-changing world, requires considerable organizational effort, political leadership, and member state commitment. More broadly, a deep cultural shift must be internalized at all levels.

Building on the work of predecessors, Secretary General António Guterres has embarked on just such an attempt.  By making the concept of sustaining peace central to his agenda, Guterres hopes to accomplish what others have tried and largely failed: to get the UN to take conflict prevention seriously, across the board, and in concrete ways.  Boutros Boutros-Ghali pushed for An Agenda for Peace, and Kofi Annan pressed for a ‘culture of prevention.’ Despite some incremental changes, these efforts did not fundamentally change the organization. And the demand for such a transformation has only become more pressing given the complexity of contemporary conflicts and the persistence of underdevelopment, which require a multi-dimensional approach straddling the “silos” that emerged over time between the three pillars of the UN system: security, development, and human rights.

Conceptual work is needed because, if broadened far enough, conflict prevention comes to encompass everything.  The term loses analytical rigor and, at a practical level, cannot be operationalized into specific policies, programs, and responses.  This effort was launched even before Guterres assumed his present post. The idea of sustaining peace emerged out of the 2015 review of the UN peacebuilding architecture, alongside two other reviews—that of Peace Operations (which yielded the HIPPO report) and that of the Women, Peace and Security agenda. All three review processes yielded concrete recommendations about how the UN could address its own weaknesses in dealing with instability, violence, and conflict.

Twin resolutions adopted by the UN Security Council and General Assembly in 2016 then defined sustaining peace as “a goal and a process to build a common vision of a society […] which encompasses activities aimed at preventing the outbreak, escalation, continuation and recurrence of conflict.”  This ambitious framing is premised on a more nuanced understanding of the drivers of instability and conflict, captured in the oft-repeated term “addressing the root causes of violence and conflict.”  In turn, tackling the causes of conflict (both structural and immediate) requires a range of approaches and activities that take into account the entire peace continuum, from conflict prevention and resolution to peacekeeping, peacebuilding, and peacemaking.  These areas are now acknowledged as being intricately tied to development, human rights, and strengthening state institutions and the rule of law, and they do not follow the clean sequencing that once guided the UN’s view of conflict.

At the same time, organizational reform that is aligned with this conceptual effort is necessary to render the UN “fit for purpose,” that is, both capable of and featuring the built-in incentives to engage preventively and comprehensively with conflict.  The organizational reforms proposed by Guterres starting in 2017 are designed to adequate the UN machinery to adopt this cross-cutting vision.  A starting point revolves around efforts to strengthen ties between the 2030 Agenda for Sustainable Development and, on the other hand, the Sustaining Peace Agenda. New ideas have also been put forth for strengthening the Peacebuilding Architecture and creating stronger links between the Department of Political Affairs (DPA) and the Department of Peacekeeping Operations (DPKO).

What, then, is new about this particular effort?  Aside from the effort to closely align conceptual work with organizational reforms, the sustaining peace paradigm has three potential innovations.

First, much like the 2030 Agenda, the sustaining peace vision is universal, meaning that conflict prevention is no longer narrowly associated with the concept of state fragility and thus reduces the stigmatization of conflict-affected states. Sustaining peace, Guterres has underscored, requires concerted effort by the entire international community.  Thus, advanced economies and P-5 states also have responsibility to curb conflict, for instance through nuclear non-proliferation, disarmament, climate change cooperation, and integrated migration policy, as well as addressing structural violence patterns within their own borders.  The inclusiveness of sustaining peace also opens up new spaces for acknowledging the destabilizing role that military intervention responses can have, even when carried out in the name of conflict prevention.

Second, sustaining peace is comprehensive in that it encompasses the full conflict cycle—in which armed conflict is only the most extreme category in a much broader and seldom linear set of manifestations of discontent, disenfranchisement, disagreement, tensions, and open violence.   This point invites reflection and action based on a long-term view of conflict (rather than just addressing imminent crises, or simply managing conflict in the sense of avoiding escalation and spillovers) and takes seriously the value of development for political and social stability.   At the same time, because in this context conflict refers to a very broad set of phenomena, including violence that has been more often associated with domestic policymaking rather than international initiatives, this point may cause some alarm among states and other actors concerned with national sovereignty.  It may also trigger concern among states whose policy elites believe that conflict prevention may be manipulated so as to impose additional conditionalities on the provision of aid.

Third, sustaining peace underscores the importance of socioeconomic inclusiveness, not only in addressing the root causes of conflict but also in designing responses to imminent or ongoing conflict.   The Women, Peace and Security Agenda that arose out of UNSC Resolution 1325 has brought about some advances in bringing attention to the importance of the meaningful participation of women in conflict prevention and resolution, but there is still much work ahead, including within the UN’s own ranks.  In addition, the intersectionality of gender with other social cleavages—from race and ethnicity to age—must be taken into account if the deep disenfranchisement that typically contributes towards conflict is to be addressed.  Inclusiveness should also be taken to mean inclusion of actors at different levels, with primacy granted to local and national ownership, requiring that international actors—including the UN—carefully calibrate the tone and type of engagement with conflict prevention.

Will the idea of sustaining peace have a lasting impact on the UN’s role in international affairs, or will the concept fizzle out as yet another buzzword?  It is too soon to tell, but clearly promoting this agenda will require not only conceptual work and organizational reform meant to address UN weaknesses, but also strong political will. Within the UN, this will demand steady guidance by Guterres in times of uncertain leaderships within the system. Just as importantly, it will require partner organizations and member states to take on firm political commitments towards the Sustaining Peace agenda.

As Weber suggested, there are strong forces within institutionalized bureaucracies—even the most efficient among them—that tend towards inertia rather than change. Reform is not easy to accomplish, and deeply entrenched interests may thwart some of the changes being proposed. Maintaining momentum for organizational transformation may thus ruffle some feathers, bring to the surface certain organizational territorialisms, and cause some general discomfort.  But the message is clear: conceptual, organizational, political and cultural change is needed if conflict prevention is to finally be taken seriously and be made effective.