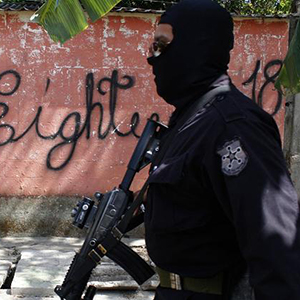 What it will take to stem the violence in Latin America

The sense of unease on many Latin American city streets is palpable. Fear and uncertainty affect people’s day-to-day decisions — whether to take public transport, where to buy groceries, when to go out at night. Pervasive insecurity also influences long-term plans — what neighborhood to move to, whether to save or spend and, finally, whether to emigrate or stay put.

Latin Americans have good reason to feel unsafe. Mexico´s soaring homicide rates have reached 20-year highs. The Central American cities of San Salvador (El Salvador) and San Pedro Sula (Honduras) rank among the most dangerous on the planet. Assessments by independent research groups in Venezuela suggest that Caracas is as bad or worse, though it’s impossible to know since the government stopped publishing crime statisticsa decade ago. Brazil alone is home to 25 of the 50 most homicidal cities in the world.

In response, a new campaign, Instinct for Life, sponsored by a coalition of more than 40 Latin American organizations, is committed to shattering the region’s widespread tolerance of violent crime and cutting its homicide rates in half by 2030. In order to better understand attitudes toward lethal violence, and how to mobilize citizen action, the coalition commissioned national surveys in Brazil, El Salvador, Honduras, Mexico, Guatemala and Venezuela — the six most violent countries in the region.

Not surprisingly, the surveys (conducted by the Latin American Public Opinion Project) found that between 50% and 75% of the respondents were afraid of being victims of homicide. They also found that despite the fear — and the real violence it is based on — Latin Americans believe the killing can be stopped, and they understand how best to accomplish that.

In Brazil and Venezuela, roughly 60% of respondents confirmed that a slaying had occurred in their neighborhood within the previous 12 months. Among those surveyed, Brazilians and Venezuelans were the most likely to report monthly and even weekly killings nearby. In Mexico, about half the respondents registered local homicides, and in both El Salvador, Guatemala and Honduras, it was between 30% and 40%.

Curiously, there is not always a direct correlation between high rates of homicide and local perceptions. The differential shows up starkly in Honduras and El Salvador. Compared with the other nations surveyed, fewer respondents in these countries reported homicides occurring in their neighborhoods, and yet the homicide rates in El Salvador and Honduras are among the highest in the world — 91.2 and 59.2 per 100,000, respectively. The most likely explanation is that people exposed to chronic violence “normalize” it over time.

Whatever their perceptions of violence, Latin Americans believe the situation can be turned around. A majority of the survey respondents said that national governments should take the lead (51.6% in Mexico, 55% in Honduras, 66% in El Salvador, 60.3% in Guatemala, 68.5% in Venezuela and 68.7% Brazil). That this view extends to Brazil and Venezuela, where the nations’ leaders are immensely unpopular, is somewhat surprising.

These hopeful views are backed by evidence. The Instinct for Life campaign has identified a series of data-driven measures that have successfully prevented killings. These include deterrence-based strategies that prioritize the most violent crimes, hot spot interventions, responsible gun and ammunition regulation, and recidivism prevention. When it comes to value for money, the most effective strategies to reduce lethal violence are investing resources in stabilizing unstable households and promoting positive parenting. Interventions that keep children in school, provide vocational training, generate meaningful jobs and teach life skills to at-risk youth are also effective.

At the very least, Latin American governments would do well to avoid what evidence shows does not work to improve safety and security. Heavy-handed punitive measures that privilege repressive policing, draconian sentences and mass incarceration can make homicide problem much worse. Aggressively enforced drug prohibition policies and just-say-no drug abstinence programs are even more damaging.

If Latin American governments are going to make headway in reducing homicide, they could do worse than listen to the wisdom of their own citizens.