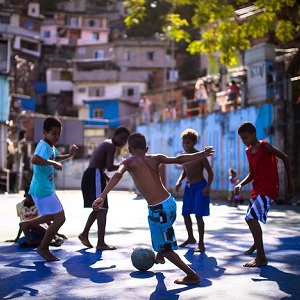 Securing peace in Colombia
As a Colombian, I think the key to securing peace is to strengthen our institutions and guarantee predictable and stable financing. With a fiscal deficit and the potential of a decrease in international cooperation, Colombia must develop innovative ways to finance the process. Disarmament, reintegration of ex-combatants, collective reparation processes, the Special Jurisdiction for Peace, and many other pieces of the puzzle will need adequate funding. The risks are enormous. We could see massacres of left-wing leaders and activists, a return to illicit economies, land grabbing, displacement, deforestation. Dealing with the power vacuums that will be left is critical. Camila Bustos

‘Latin America is far from peaceful’
One thing virtually all countries and cities share is unacceptably high levels of violence. There are virtually no areas and populations untouched, and the burden falls disproportionately on the poor. The problem is getting worse – we are going to see a continued rise to 35 murders per 100,000 people if nothing is done.

A key factor in this has to be drug decriminalisation and regulation. The evidence is glaring that the war on drugs has failed, and several Latin American presidents and social leaders have stepped up and changed the tone of the conversation.

But what also has to happen are stronger commitments by national governments, businesses, civil society and faith-based leaders to homicide reduction. How about a regional commitment to reduce homicide by 50% in 10 years? That would be the equivalent of 7.5% a year. Some countries and cities have already started achieving similar gains, even if the overall trend is upward. Robert Muggah, research director, Igarapé Institute and SecDev Foundation, Rio de Janeiro, Brazil

The ‘Trump nightmare’
With the new Trump administration, for Central America (Guatemala, Honduras and El Salvador) a key challenge will likely be addressing the effects of mass deportations (creating jobs, accommodating returned diaspora and addressing the loss of remittances that make up significant portions of those countries’ GDP). They will have enormous challenges for governments in these countries. I like to believe there’s a silver lining in a population that is returning with different skills and knowledge of a second language and networks abroad. Housing and “assimilation” back to countries of origin will be important to minimise social unrest and the initial shock prior to readjustment. Federico Cartin-Arteaga, president and director general, Fundación Rutas Naturbanas/SUM Consulting, San José, Costa Rica

I hope that the “Trump nightmare” will be used to start discussing new development alternatives that depend less on natural resources and foreign trade. Stronger, but more meaningful, regional integration is one of the best responses to Trump’s threat. I just fear that a weak Brazil will make things harder to advance towards more joint work between Latin American countries. Regional integration has always been hard in Latin America, but I think there are several issues at the moment: Mexico’s reluctance to look South even today; Brazil’s domestic weaknesses. Diego Sánchez-Ancochea, director, Latin American Centre, University of Oxford, Oxford, UK @dsanco

The impact of climate change
The effects of climate change on our coast lands as well as farming capacities is a huge challenge. Additionally, what reductions in yields can do to our rural populations and economies, internal migration patterns. Most of our countries offset carbon from the rest of the world (such as Amazonia). This will be a further challenge ahead, particularly with Trump’s climate change denialist agenda and likely pulling funds and support behind COP21.

Costa Rica for one has merit in this front, not only in how electric energy is produced, but in reforestation efforts since the 70s (we went from 25 to 50+ forest coverage). Protecting the Amazon from illegal wood extraction will be important in Brazil. Further international support will be important to ensure national capacity to enforce protection. Europe, China and the small nations will have to pull together. Federico Cartin-Arteaga

The growing intolerance with corruption
The fight against corruption is probably one of the region’s most significant innovations in recent years. Latin America has long had the reputation of corruption and its cousin “informality”. But action has been sporadic, episodic and half-hearted.

Five governments have signed conventions against corruption. Argentina’s new president Macri has introduced a bill to fight bribery in 2015. Brazil introduced a clean company act, but it lacked teeth (and is criticised for being too lenient). Chile has introduced a law criminalising bribery and enforcing compliance on companies.

These anti-corruption crusades have short-term costs, but should have longer term benefits for democracy and economic growth. Robert Muggah

‘A region where activists are killed’
I think social movements can be extremely powerful. Massive mobilisation increases pressure on governments and the demand for accountability. My concern is that we are also talking about a region where activists and social leaders are detained and killed on a daily basis. Without secure spaces for participation, citizen engagement (especially in rural areas with poor governance) is quite difficult. The fear decreases participation, which inevitably undermines legitimacy and trust in government.