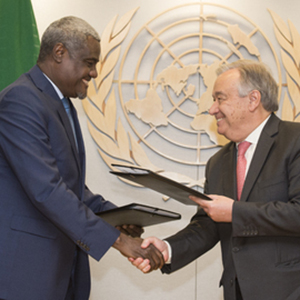 Progress has been made, but financing remains one among several key issues that must be resolved 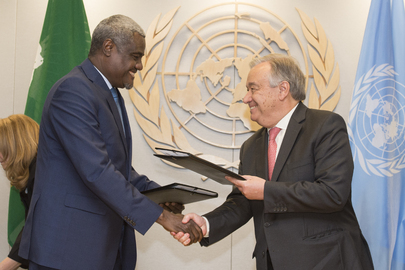 The past year has been an eventful one for reform at the United Nations (UN) and African Union (AU), with both organisations attempting to tailor themselves to the challenges of contemporary conflicts.

On 20 September, the UN Security Council held an open debate for heads of state on the implementation of the 2015 High-Level Independent Panel on Peace Operations (HIPPO) report recommendations. Over 160 were made on how to ensure better design and delivery of UN peace operations, focusing especially on how to make peacekeeping more responsive and fit for purpose.

Member states discussed progress on peace operations reform, focusing on a stronger AU-UN partnership. A negotiated resolution was approved stressing that despite its challenges, peacekeeping remained the UN’s most effective tool.

Creating stronger relationships is one of the key recommendations of HIPPO, under the broader heading of ‘global-regional peace and security partnership’. It is also a common goal of UN Secretary-General António Guterres, AU Commission chairperson Moussa Faki Mahamat, and current holder of the UN Security Council presidency, Ethiopia.

In New York this week, member states debated how peace operation mandates were developed by the UN Security Council, and how the process could become more strategic and inclusive. It focused on some of the AU’s concerns, including how the council could further support the UN and AU’s strategic partnership.

The AU has used several ad hoc security initiatives in trying to adapt, which enable its members to implement shared responses to common threats. These include the Regional Cooperation Initiative for the Elimination of the Lord’s Resistance Army, which covers areas of the Democratic Republic of the Congo, Central African Republic, South Sudan, Sudan and Uganda; and the Multinational Joint Task Force, mandated to destroy Boko Haram and comprising a force from Cameroon, Chad, Niger, Nigeria and Benin.

The AU and UN’s recent approval of the Group of Five (G5) Sahel joint force highlighted some of the divisions in the Security Council around the use of new sub-regional approaches. This force comprises troops from Mali, Mauritania, Burkina Faso, Niger and Chad, and is mandated to fight terrorism and drug and human trafficking in the Sahel region.

Following tough negotiations over whether the UN Security Council should consider using UN-assessed contributions to support its budget, Resolution 2359 was adopted. Ultimately this resolution urged bilateral and multilateral partners to support the G5 Sahel force and to ensure the coordination of donor aid.

The force is currently funded by the European Union, France and the G5 countries themselves, with political legitimacy provided by approval from the AU’s Peace and Security Council. This is an example of the tension over funding ad hoc initiatives for peace operations. It points to the longer-term controversy over the proposed use of UN member states’ contributions for financing 25% of the AU’s operations.

A joint consultative meeting on 8 September between the UN Security Council and the AU Peace and Security Council showed that many issues remain unresolved in the AU-UN partnership. Key among them is the lack of predictable and sustainable financing options for the AU, which has long been a constraint on maintaining regional peace and security.

The HIPPO report highlights the gap between the mandate and capacity of peacekeeping operations that occurs when finances are involved, especially with the current pressure to cut the costs of peacekeeping operations. The 20 September open debate and resolution highlighted the issue of funding AU peace support operations, considering the decreasing UN peacekeeping budget. With this and the United States cutting its contribution and preferring bilateral commitments over multilateral ones, the financing side of the AU-UN partnership is left without a UN Security Council champion.

The US didn’t mention the money issue during the debate, but the resolution passed does reaffirm an AU commitment to fund 25% of the cost of its own peace and security efforts.

In order for the discussion on the AU-UN relationship to move forward, the AU must put its house in order. Sustainable external financing options are important, but AU progress towards its own reform would be a sign of positive change at the organisation.

The appointment of a head and deputy head of the AU’s newly formed Institutional Reforms Unit this month is also an important step towards increasing the organisation’s effectiveness and showing a sense of urgency to the process. It could help get more AU member states to support reform efforts and the drive for more effective structures and approaches.

Meanwhile a recently signed memorandum of understanding between the AU and UN on peacebuilding could indicate broader and closer collaboration between the two institutions, moving beyond the current focus on peace operations alone. Working alongside the UN’s peace agenda and the AU’s post-conflict reconstruction and development focus, it opens the door to more holistic responses to conflict, including prevention and addressing the root causes.

Better collaboration could take the AU-UN partnership one step further, but only if it is adhered to by both parties. A more clearly defined division of labour and a burden-sharing arrangement to enhance cooperation and efficiency will help achieve effective responses to Africa’s conflicts.

This article is an adapted version of a piece that first appeared at the International Peace Institute Global Observatory.