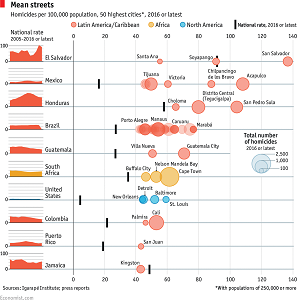 The world’s most dangerous cities 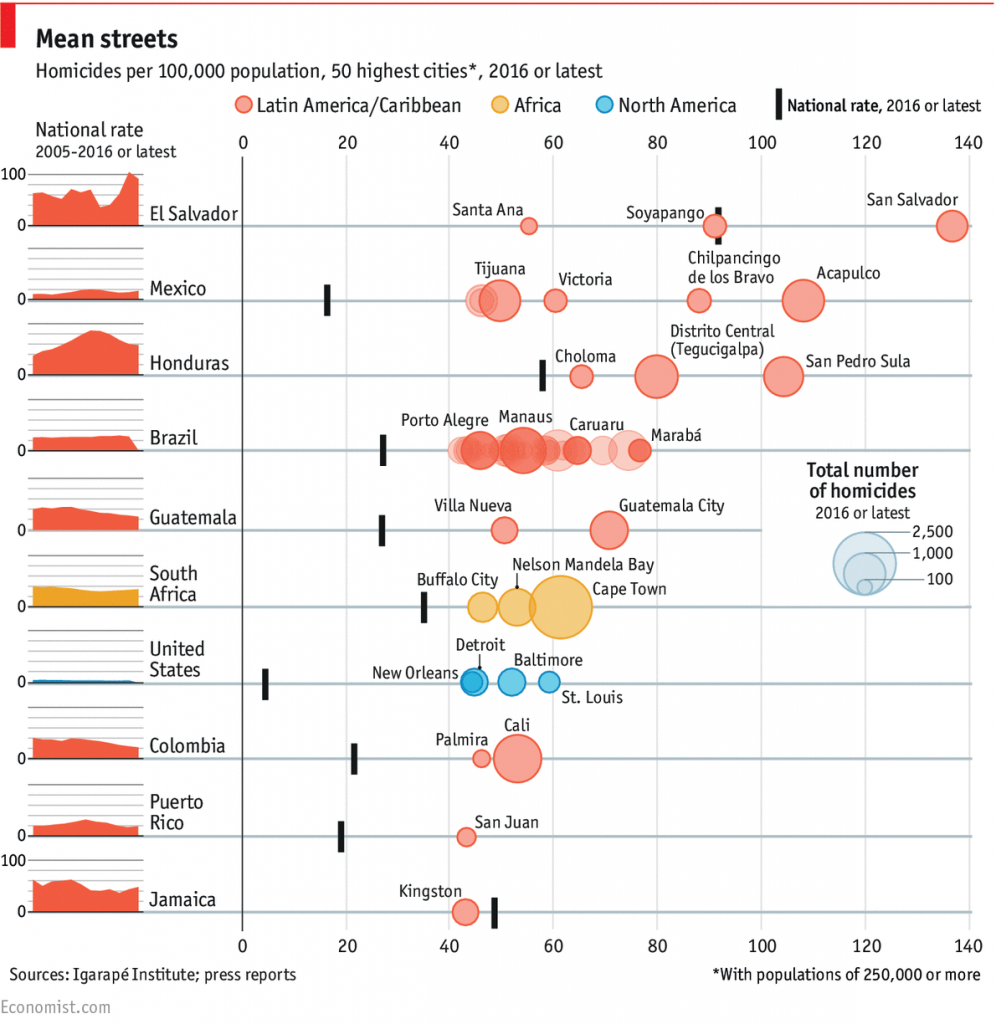 COCAINE is grown primarily in South America, and trafficked to the world’s biggest market, the United States, via Central America and the Caribbean. The land routes originate mainly in Colombia, and pass through the small nations of El Salvador, Honduras and Guatemala before traversing Mexico. It is little wonder, then, that Latin America remains the world′s most violent region not at war. According to data from the Igarapé Institute, a Brazilian think-tank, 43 of the 50 most murderous cities in the world last year, and eight of the top ten countries, are in Latin America and the Caribbean. (War zones, where numbers are hard to verify, are excluded.) Conflicts between gangs, corruption and weak public institutions all contribute to the high levels of violence across the region.

The top of the rankings has not changed. In both 2015 and 2016, El Salvador was the world′s most violent country, and its capital, San Salvador, was the most murderous city. However, the most recent numbers do represent a slight improvement: the national rate fell from 103 killings per 100,000 people in 2015 to 91 last year, and San Salvador′s from 190 to 137. Most analysts credit a clampdown by government security forces for this reduction, though tough-on-crime policies do little to address the underlying causes of gang violence. A similar downward trend is evident in neighbouring Honduras: San Pedro Sula, which for years wore the unwelcome crown as the world′s most murderous city, now ranks third.

However, spikes in violence in neighbouring countries suggest that anti-gang policies are merely redistributing murders geographically rather than preventing them. Acapulco, a beach resort on Mexico′s Pacific coast, recorded 108 homicides per 100,000 people last year, placing it second behind San Salvador. That reflects the nationwide trend: Mexico′s overall rate rose from 14.1 killings per 100,000 people to 17. That figure nearly equals the previous violent peak of Mexico′s drug wars, in 2011. As a result, six Mexican cities rank among the top 50, three more than did so a year earlier. And there is no evidence of a reversal in 2017. The number of murders in Mexico during the first two months of 2017 is the highest for January and February since records began.

The middle of the list is dominated by Brazil: the world′s second-biggest cocaine consumer is home to half of all cities in the ranking. That mostly reflects its large population. During the past year, violence has reshuffled from place to place within Brazil: the murder rate has fallen in the largest cities, but increased in smaller ones. In Maraba and Viamão, homicides rose by 20% in a year, whereas in São Paulo, Brazil’s most populous city, murders fell by 55% from 2014 to 2015. Unlike in Mexico and Central America, there is evidence of a slight overall improvement: the national homicide rate fell from 29 per 100,000 in 2014 to 27 in 2015, the latest year for which data are available. Nonetheless, by sheer virtue of its size, Brazil reigns as the world′s overall murder capital: 56,212 people were killed there in 2015.

Only two countries outside Latin America contain cities in the top 50: the United States and South Africa. In America, the only rich country on this list, a spike in homicides has propelled two more cities, Detroit and New Orleans, to join St Louis and Baltimore, which also figured on last year′s list. Each has a rate that is around ten times the national average of 4.9 homicides per 100,000 people. South Africa is the only country outside the Americas on this ranking. Two new cities, Nelson Mandela Bay and Buffalo City, have been added to the list, mainly because data collection is improving in the country. The homicide rate in South Africa did climb 5% last year, though other violent crime dropped.