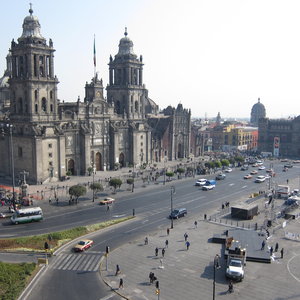 The Real Reason Behind Rising Violence in Mexico City

Until recently, Mexico City was considered an oasis in a country beset by skyrocketing violence. Even though one in two Mexican adults said they stopped going out at night for fear of being mugged or worse and one fourth of all adult Mexicans were victimized in 2014, the capital was largely exempt. In posh neighborhoods like La Condesa and Polanco, the restaurants and nightclubs kept buzzing.

But something new is going on. Mexico City has witnessed a steady increase in violent crime over the past few years. Homicides shot up by more than 20 percent last year, levels not seen since 1998. In spite of over $1 billion spent on public security last year, recent studies show that a third of the capital’s population was a victim of crime and two thirds do not trust the local police.

The question people are asking is – why?

As expected, the study finds that criminal violence is hyper-concentrated in very specific neighborhoods of Mexico City. More than 50 per cent of all police investigations occurred in just 20 of the city´s 76 municipalities. Statistical tests reveal that there are 10 key hot spots, almost all of them within the federal district, accounting for more than a quarter of all crime.

More importantly, the study detects a very strong relationship between high-crime areas and what criminologists refer to as “social disorganization” and “institutional anomie.” Put succinctly, crime rates are positively correlated with underdevelopment, income inequality, voter turn-out and, especially, the extent of family cohesion.

There are several practical policy implications emerging from the study. The most important is that narco-trafficking gangs are only part of the problem. A particularly robust predictor of violent crime is family disruption, especially the proportion of female-headed households. And family disruption is growing rapidly in Mexico City. What this means is that public authorities need to start investing more seriously in parental skills and childcare provision.

The study’s big take away is that crime prevention in Mexico City should combine smart law enforcement focused on hot spots with preventive policies that limit family disruption and offer targeted subsidies. The city’s lawmakers should avoid the temptation to deploy more police, impose stiffer penalties and throw more people in prison. There are much greater crime reduction dividends from data-driven efforts to improve the lives and opportunities of working families and unsupervised youth.