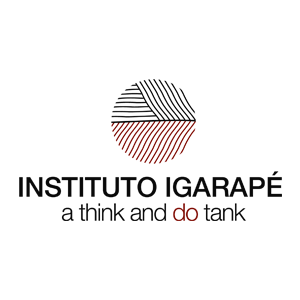 From the Amazon Basin to equatorial Africa and Asia, some of the world’s largest and most biodiverse habitats are facing unprecedented threats. Environmental crime has gone global, posing existential risks not just to some of the world’s signature biomes but also to the international quest for sustainable development and zero deforestation. The Amazon Basin, spanning eight nations, faces record deforestation and degradation, virtually all of it illegal. Land grabbing, slash and burn farming, and wildcat mining are pushing the world’s signature rainforest to a tipping point, from which scientists warn it may not recover.

Environmental plunder is also a call to action. In this spirit, the Igarapé Institute and the Science Panel for the Amazon (SPA) have joined forces this week in New York to share, explore and debate innovative opportunities to disrupt and deter environmental crime in the world’s largest and most diverse rainforest. Kicking off Sept 15, at ((venue?))the seminar “Accelerating the rule of law and scaling sustainable development to end deforestation in the Amazon Basin” will review the latest findings on the scope and scale of the threats to the Amazon, the most promising strategies to confront the assault, and how public and private institutions can and must work together to safeguard habitats in harm’s way.

The Igarapé Institute has partnered with leading international, regional and national organizations to assess these escalating risks, the criminal networks behind them, and how governments and private interests can unite to curb illegalities and deliver nature and people-based solutions. Igarapé Institute and SPA will showcase the latest evidence, drawing on the Institute’s research from climate and security program, including the EcoCrime initiative, and from the SPA’s most recent report. The seminar welcomes open, informal debate to explain and critique the best practices for stopping and preventing environmental crime from all sectors of society, including satellite and drone-based early warning and detection, supply chain transparency dashboards and technology-enabled agroforestry.

About the Igarapé Institute:

The Igarapé Institute is an independent think and do tank focused on the areas of citizen, digital and climate security. Its objective is to propose solutions and partnerships for global challenges through research, new technologies, communication and influence on public policies. The Institute works with governments, the private sector and civil society to design data-based solutions. We were awarded the best Human Rights NGO in 2018 and the world’s top think tank on social policy by Prospect Magazine in 2019. We are a non-profit, independent and non-partisan institution, headquartered in Rio de Janeiro. The Igarapé Institute has teams distributed across Brazil, Canada, Colombia, Ecuador, South Africa, the United States and the United Kingdom and partnerships in over 20 countries.

About the Science Panel for the Amazon:

The Science Panel for the Amazon, inspired by the Leticia Pact, is the first high-level science initiative dedicated to the Amazon. The Panel was established to make clear the scientific, economic, and moral case for conservation and address widespread deforestation, forest degradation, and wildfires that have intensified in recent years. Today the Panel is composed of over 240 scientists who released The 2021 Amazon Assessment Report at COP26, which has been called an “encyclopedia” of the Amazon region. This landmark report is unprecedented for its scientific and geographic scope, the inclusion of Indigenous scientists, and its transparency, having undergone peer review and public consultation. The SPA also aims to stimulate science advancement by covering knowledge gaps and involving more science academies and young researchers, as well as by spurring investment in science, technology, and innovation in the Amazonian region. The SPA is convened under the auspices of the Sustainable Development Solutions Network (SDSN). Dr. Jeffrey Sachs, the Director of SDSN, is the convener of the SPA, and Dr. Carlos Nobre (Instituto de Estudos Avançados – USP) is the Co-Chair.