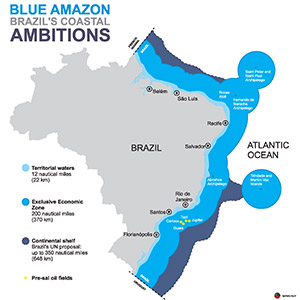 The Blue Amazon: Brazil Asserts Its Influence Across the Atlantic

By Nathan Thompson and Robert Muggah

After years of shoring up security alliances in Latin America and the Caribbean, Brazil is now looking eastward, asserting its influence across the Atlantic Ocean. Brazil started quietly, providing Africa with technical assistance in science, technology, and professional development.

But over the past decade, Brazil has coupled soft-power initiatives with a dramatic boost in military cooperation with Africa, conducting joint naval exercises, providing military training and arms transfers, and establishing outposts in ports across the continent’s western coast. Today, Brazil’s official defense posture is even more far-reaching, involving the ability to project power from Antarctica to Africa.

Brazil’s transatlantic partnerships are the culmination of a long-standing ambition. In 1986, alongside Argentina, Uruguay and 21 African countries, Brazil proposed the South Atlantic Peace and Cooperation Zone. The unstated goal then, as now, was to minimize external meddling in the region, especially by NATO.

The desire to keep foreigners out of the South Atlantic is motivated in large part by commercial interests. Brazil, in particular, wants to safeguard its on- and offshore natural resources, which the navy calls the Amazônia Azul, or Blue Amazon. These include extensive petroleum and gas reserves, as well as fishing and mining concessions within and beyond its current maritime frontiers.

To Brazilian leaders, preserving influence over the Blue Amazon is a question of national security and sovereignty. The Brazilian navy’s PROMAR program actively promotes public awareness campaigns extolling the economic, environmental, and scientific importance of the South Atlantic.

To secure the boundaries of the Blue Amazon, Brazil is petitioning the UN Commission on the Limits of the Continental Shelf to extend its exclusive economic zone, the area stretching 200 nautical miles out from the coast, in which a country has special rights to explore and use marine resources.

To shore up its demands, Brazil is creating a sophisticated surveillance system to monitor the Blue Amazon. The so-called Blue Amazon Management System is intended to scan more than 4,600 miles of coastline for foreign military and commercial vessels through a combination of satellites, radar, drones, naval vessels, and submarines.

In January, the country named three finalists to develop the $4 billion project: a consortium led by the aerospace conglomerate Embraer, another led by the multinational construction company Odebrecht, and a third by the aerospace upstart Orbital Engenharia. The Brazilian army is also building a multibillion-dollar border surveillance system, and the two programs may eventually be integrated.

In Africa, Brazil’s influence extends beyond the continent’s six Portuguese-speaking countries. Its total trade with African nations ballooned from roughly $4.3 billion in 2000 to $28.5 billion in 2013. Not surprisingly, Brazil’s security partnership with Africa is motivated to a large extent by a desire to expand business opportunities for Brazilian defense firms.

In 1994, for example, Brazil signed a defense cooperation agreement with Namibia; today, Brazil is the primary supplier and training partner of Namibia’s navy. In 2001, Brazil secured its foothold in southern Africa by opening a naval advisory mission in Walvis Bay, Namibia’s largest commercial port and sole deep-water harbor.

Meanwhile, a defense cooperation agreement with Mali is currently under review, and Brazil’s Ministry of Defense has announced plans for a third naval mission in São Tomé and Príncipe, to open this year.

Brazil is also providing Africa with military, air, and navy training. Between 2003 and 2013, the Brazilian Naval School and Naval War School trained as many as 2,000 military officials from Namibia alone. The Brazilian air force has provided support to pilots from Angola, Guinea-Bissau, and Mozambique. And since 2009, the Brazilian Cooperation Agency has partnered with the country’s Ministry of Defense, budgeting roughly $3.2 million from 2009 to 2013, for training programs for African military personnel.

The flurry of cooperation agreements sends a strong signal to Brazilian defense contractors to do business in Africa. Both public and private firms are getting in line, not least trade organizations such as the Brazilian Defense and Security Industries Association, Comdefesa, and the Brazilian Trade and Investment Promotion Agency.

Brazilian arms manufacturers have ramped up their efforts to align weapons development and technology production pipelines with African demand. Embraer, for example, brokered several deals to sell its signature aircraft, the Super Tucano A-29, along with training and technical assistance. The company signed contracts with Angola, Burkina Faso, and Mauritania worth more than $180 million in total.

Likewise, Ghana, Mali, and Senegal either signed procurement deals or signaled their intention to purchase Embraer’s Super Tucano. These deals pale in comparison with those the company has made with the United States, Sweden, and the United Arab Emirates, but they are significant nevertheless, since they signify a deepening relationship with Brazil.

Brazil is also cashing out at international arms fairs, and some of its major clients are based in Africa. The country shipped more than $70 million in small arms and ammunition to 28 African countries from 2000 to 2013, according to the latest available UN data. Algeria tops the list of Brazil’s small arms and ammunition clients, with purchases of more than $23 million. Algeria is followed by Botswana, South Africa, Kenya, and Angola.

Arms fairs offer important opportunities for Brazil to deepen its south–south cooperation with Africa. At the 2013 Latin America Aerospace and Defense fair, the largest in the region, Brazil’s minister of defense met with 14 ministers or deputy ministers from African and Latin American countries over the course of just three days. Such events confirm that Brazil is hardening its soft power across the South Atlantic. In the process, Brazil is using Africa to signal its arrival as a global player on the world stage.