the Role of Climate Change in Recurring Violence 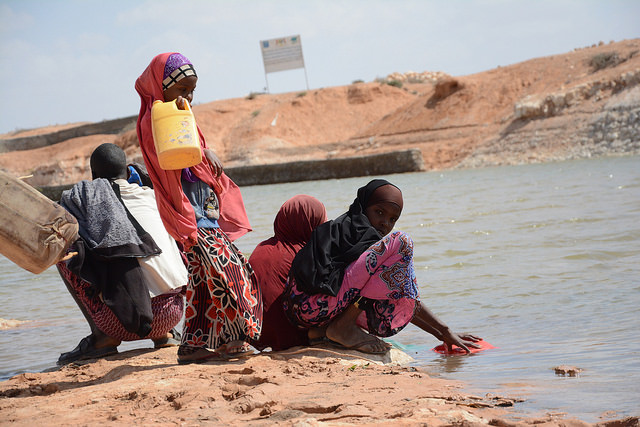 The deadliest blast in Somalia’s history, which killed more than 350 people, and the double car bombing in Mogadishu last October represented frustrating backslides in the country’s efforts to build stability. For almost 30 years, Somalia has been tackling a combination of civil war, famine, desertification, piracy, political fragmentation, and terrorism — even as the population struggles to rebuild and move forward.  Although the conflict has many underlying causes, one factor that remains poorly understood is climate change. In a country where, alongside war, six million people currently face starvation, understanding the role of climate change and its impact on patterns of drought — and developing innovative responses — is more pressing than ever.

Since the country’s state and social resilience to climate consequences is limited, the ability of around 70% of Somalis to meet their basic needs depends heavily on a regular climate pattern.  However, over the past decade climate change-related desertification has expanded in Somalia, greatly increasing the vulnerability of the local population. Climate change feeds armed conflict in Somalia by exacerbating tensions between clans; boosting the ranks and role of terrorist groups, including al-Shabaab; and increasing migratory flows.

First, climate change sharpens disputes over already-scarce resources between warlords.  While Al-Shabaab has conquered large pieces of the country’s territory, clan elders still wield considerable power, dominating the political system. In this sense, the severe droughts cause disruptions to water access, high rates of malnutrition, disease outbreaks, and food insecurity, leading to tension and even open disputes between the clans.  In a country facing this set of challenges, resources like food and water are not only a basic need but also a source of power.

Second, the relationship between the proliferation of illegal armed groups and the severe droughts in Somalia is evident in the case of al-Shabaab.  The group has been successful in attracting young people who are affected by famine and food insecurity and who face no job prospects; those youth end up joining the armed group in a bid to survive, finding no other option other than to submit to the extremist group.

Third, migration has become more complex due to climate change.  In 2016, at least one million Somalis were internally displaced, exposed to protection risks, discrimination, and gender-based violence.  Making the situation even worse, around 300,000 Somalis refugees living in the Dabaab refugee complex—the world’s largest refugee camp, located in neighboring Kenya—have faced heightened uncertainty since Kenya announced that the compound would close.

Although desertification perpetuates and expands the levels of violence in Somalia—with possible spillovers into neighbor states, as already is the case of Kenya—climate change has received relatively little attention when compared to areas such as anti-terrorism and security sector reform (SSR). Indeed, global and regional powers and international organizations have focused on fighting terrorism and piracy in the Horn of Africa.

Most of the international community recognizes the influence of human activity on the climate system and its severe consequences, such as shifts in rain patterns, increasing desertification, higher frequency and severity in tornados and hurricanes, temperature disturbance, and frequent heat waves. Nonetheless, neither the Paris Agreement nor the next United Nations Climate Change Conference – set to happen in Bonn, Germany, from November 6 to 17, 2017 – address the links between climate change and the exacerbation of armed conflicts or recommend ways to build resilience in this area in fragile states. This is particularly worrisome because even a slight alteration in the global temperature is enough to provoke a set of weather calamities.

On the one hand, many developing and developed countries are implementing public policies to prevent, mitigate, and adapt to climate change consequences.  In most of these cases, governments and other stakeholders are able to tap into technical expertise, new technology, and relatively or highly stable societies. On the other, conflict-affected countries, which are socially, politically and economically vulnerable, encounter considerable obstacles in addressing the effects of climate change. Instability, low state capacity, and the prioritization of more immediate goals tend to sideline climate change considerations even than the phenomenon exacerbates all local challenges.  Ultimately, this serves to intensify patterns of violence, as in the case of Somalia.

Given these obstacles, initiatives to adapt and mitigate consequences of climate change in fragile countries must be incorporated in approaches to prevent the occurrence, escalation, or recurrence of armed conflicts, including through the G7+ group of “fragile states” and its effort to promote Agenda 2030 in conflict-affected states, including through implementation of Sustainable Development Goal 16.

The Enhancing Climate Resilience of the Vulnerable Communities and Ecosystems in Somalia initiative (2014-2019), a partnership between Somalia’s government, UNDP, and GEF, represents a promising yet somewhat isolated example. The goal is to implement ecosystem-based drought and floods preparedness to adapt to extreme climate events.  For instance, the project is currently working with small-scale farmers in parts of Somalia, such as Puntland. Although the initiative is still local, if it succeeds, efforts to scale up the response should be considered. International actors should also consider responses such as the transfer of agricultural technology capacity, whether through aid or South-South cooperation, in order to enable farms not to lose their crops and livestock and the provision of microcredit for avoiding the loss of productive lands.

Broadly put, most African countries have a low adaptive capacity to climate change. Environmental initiatives must be taken into account in conflict prevention in Africa, since they may contribute to mid- and long-term decreases in the levels of violence, as well as promote food security and development. While climate change needs a global response, local initiatives are also required to build resilience and improve living conditions in conflict-affected states.

Giovanna Kuele is a Research Assistant at Igarapé Institute.

Ana Cristina Miola is an environmental lawyer and currently enrolled in the Natural Resource Management and Development Program at the University of Applied Sciences of Cologne, Germany.