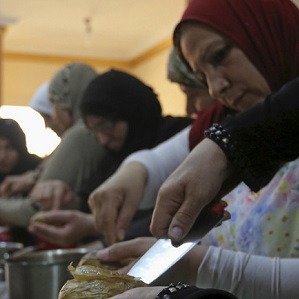 Safe havens: why cities are crucial to the global refugee crisis

The world is facing unprecedented levels of population displacement. At least 65 million people are on the move, including 21.3 million refugees and 31 million internally displaced persons since the beginning of 2016. That means that one in every 100 people globally is displaced from their home. The last time humanity came even close to these levels was during the Second World War.

There is not just one global refugee crisis, but rather multiple overlapping crises. And it is not the West, but rather North Africa, the Middle East, and South and Southeast Asia that are especially affected. A new data visualization – EarthTime Lapse – captures the scale and distribution of these crises between 2001-2016. The visualization was recently exhibited at this year’s Annual Meeting in Davosand at TED2017

While it’s easy to be mesmerized by the sheer volume of population movement, it is important to recall that each dot on the screen represents remarkable stories of struggle and survival. What is missing from the visualization is also important: for every cross-border refugee, there are at least two other people who are internally displaced within their own countries as a result of war, terrorism, famine or other causes. What else does the platform reveal?

First, contrary to what many people living in North American and Western European countries assume, their cities are not the primary destination of refugees. The US, for example, has accepted roughly 0.25% of the total population of concern since the early 1990s. Even at the height of the Syrian crisis when Europe received over 1.5 million refugees, that still represents less than 0.3% of the continent’s population.

Third, there is a very tight correlation between terrorism and migration flows. But it is not in the direction often described in sensationalist news stories. Refugees are not committing terrorist acts; they are fleeing from them. In the US, of the roughly 785,000 refugees admitted since 9/11, none has committed a fatal terrorist act. In the past 15 years less than a dozen – roughly 0.000014% – were arrested or removed due to terrorism concerns.

Cities are the primary reception point for new arrivals, including refugees. They are essential to ensuring the protection, care and eventually the integration of newcomers. This is precisely why they are a potential antidote to reactionary nationalism around the world. Where nation states and populists are closing borders, dividing communities and rejecting migrants, including those fleeing political violence, cities are instinctively open, diverse and cosmopolitan.

“Sanctuary cities” in the US are more important than ever to ensure the assistance, support and resettlement of migrants, especially refugees. But the 40 or so sanctuary cities and dozens of sanctuary counties in the US are coming under attack. The Trump administration has signed an executive order to sever federal funding to cities and counties that protect illegal immigrants by not prosecuting them for violating federal immigration laws in the city where they live. Not surprisingly, cities are fighting back.

Meanwhile, “cities of sanctuary” in the UK offer another approach to improving durable and compassionate solutions for refugees. Initiated in 1999, at least 80 cities of sanctuary in the UK are committed to welcoming refugees, asylum seekers and others seeking safety. They are actively building bridges by raising public awareness, creating linkages with sister cities and fostering partnerships through the arts. One of their most vocal proponents is the mayor of Bristol, and he is seeking to build global networks of urban sanctuary.

Clearly, the best way to end the refugee crises is to end conflicts generating population flight. This will require more international engagement, not less. As nation states default on their sovereign responsibilities, cities will also need to step up to meet this challenge. They will find strength in numbers, acting collectively rather than in isolation. Inter-city networks such as the Global Parliament of Mayors, United Cities and Local Governments and many more will be more important than ever to deliver the support that refugees so urgently deserve.

The data visualization was developed by Carnegie Mellon University´s CREATE Lab with data from UNHCR.