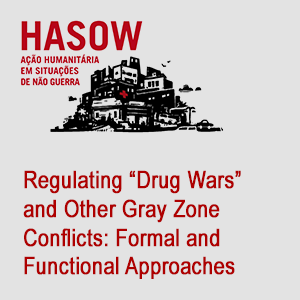 Academic debate on whether so-called “drug wars” can be classified as “armed conflicts” is more than just semantic. Indeed, the official designation of a situation as an armed conflict carries with it attendant rights and obligations applicable to states and non-state actors alike. The legal regime regulating armed conflicts is referred to as International Humanitarian Law (IHL). Some social scientists fail to understand that the debate on the applicability of IHL to “drug wars” is only marginally influenced by the broader discussions on “new wars” and “fourth generation warfare”. This article considers the principal international legal approaches to engaging with ostensibly new types of organized violence. It reviews historical progress with respect to the regulation of so-called “non-international armed conflicts” and considers the track record to date. The paper finds that the “formal approach”, based as it is on the cautious development of IHL´s existing legal basis, failed to offer a satisfying degree of legal certainty. The paper also notes how an alternative set of approaches is emerging – referred to here as “functional approaches”. The paper shows that this new generation of strategies could potentially complement the formal approach by offering alternative means of effectively regulating “drug wars” and other gray zone conflicts.