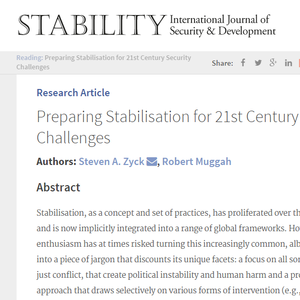 23 de November de 2015 In Other Publications

The article shows how global interest in stabilization and stability operations in fragile, conflict and violence-affected parts of the world has grow considerably over the past decade and a half. For better and worse, the concept has profoundly shaped the way diplomats, defense and development actors think and respond to crisis and conflict.

It also describes how stabilization has generated controversies and a kind of existential angst in the wider aid world. The article explores the way stabilization has been interpreted and applied by multilateral and bilateral agencies. The authors predict that it is still evolving idea and has staying power provided it stays true to its agnostic and problem-solving roots.