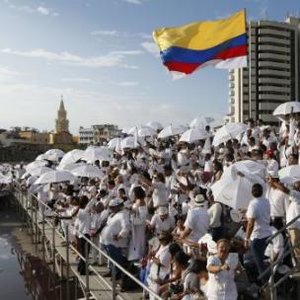 Post-conflict in Colombia (19) Uncertainty and fears after the war

The time for the signing of the peace agreements and the cessation of one of the world’s most enduring armed conflicts has finally arrived. The Colombian government and the FARC finished negotiations to bring the conflict to an end, and the formal signing of the peace agreement took place on September, 26. All that remains to be done is waiting for the result of the plebiscite on October, 2nd, which will validate it.

Doubts remain, however, about the true reach of the peace agreements in the context of the country’s complex security situation. The experiences of other armed conflicts in the world show that some forms of violence can be directly related to a conflict’s coming to an end, so this possibility should not be disregarded.

Soon the FARC will no longer call themselves an insurgent group and, officially, there will no longer be attacks and clashes within a conflict framework. This is the time when speculation about the country’s future flourishes: some outlooks are fatalistic, such as those stating that post-conflict is very costly and can generate an increase in violence, and some are positivist, such as that of the virtual movement #UltimoDiaDeLaGuerra (#LastDayofWar).

Uncertainty is to be expected, and so are fears, when switching from the war-time order to which we have been subjected for generations to a new one. It should be borne in mind, however, that Colombia is not the only country that has had to face the end of a conflict, so other global cases, and the broad academic resources available in peace and post-conflict studies, can shed light on what can be expected.

The most pessimistic outlooks often cite Central American examples as cases of upticks in violence after conflict. This are facts: in Guatemala the homicide rate rose from 19 per 100.000 people in 1986, to 21 in 1996 (the year of the signing of the peace agreement), to 50 in 2009; and El Salvador is now the country with the world’s highest homicide rate, with levels close to 120 per 100.000 citizens. However, equating an increased homicide rate with an explosion of post-conflict violence is a highly reductionist view which omits regional variations of violence, its different manifestations, and the multiplicity of causal factors behind the changes in the level and distribution of violence.

On the other hand, voices in favour of the peace agreement cite the reduction almost to a minimum of conflict violence associated with the FARC, as reported by CERAC monitoring. Neither here nor there: not all the violence that exists after the signing of a peace agreement is post-conflict violence, nor does the formal cessation of fighting guarantee sustainable peace.

From war-time legacies to the conditions for peace

The existence of an armed conflict, which has largely determined the country’s political and social relations, obviously affects the continuity and the reproduction of violence after the signing of a peace agreement. Some determining factors for post-conflict violence are directly related to the existence of the conflict in the first place, and then to its coming to an end. These are legacies of war, such as:

– Mass dissatisfaction with the peace agreements, which can give rise to outbreaks of violence;

– The return of displaced populations, which can generate property disputes;

– A limited and incomplete process of demobilisation, disarmament and reintegration (DDR), leaving forces and weapons available for a continuation and even an uptick in violence;

– The existence of a “culture of violence” which legitimizes violence as a mechanism to resolve any type of conflict;

– Limited reconciliation and reparation, which can generate conflicts within communities.

The Havana peace agreements must take into account all of these possible factors in a concrete and direct way. However, peace does not end in Havana: for a real reduction of violence to take place after the conflict, we should consider the country’s economic, social and political recovery. There are several factors not directly related to the dynamics of war which are not directly addressed in the agreements, but which in any case determine the conditions for peace after the conflict.

These conditions have been noted as causes of violence both in contexts of conflict and non conflict and as being responsible not only for some pitfalls, but also for the reproduction of violence. After the conflict, the country finds itself in a complex situation and in need of rebuilding and strengthening its institutions – specifically, the state must retake control of its territory and stabilise the country, particularly in regions where it has been absent for decades and where the FARC have fulfilled this role. This is not only to provide security, but also all the social services that the state must provide so as to generate a long-term relationship with the communities and prevent access by illegal armed groups which, at some point, have replaced the state and provided these services. The conditions for peace include addressing the following issues:

– Lack of institutional capacity to provide justice and security. In this situation, impunity will persist and the low coercive capacity of the state – i.e. low restrictions on individuals carrying out illegal and violent activities – will continue to be quite evident;

– Continuing corruption and state bodies’ involvement in criminal activities. This implies changing repressive measures for a positive relationship with citizens, which is crucial for building security, and for having transparent and accountable forces of law and order;

– Social and economic instability: in a context of inequality and lack of economic opportunities, education and effective exercise of civil rights, there are multiple possibilities for the reproduction and the reshaping of violence.

The possibilities of violence in post-conflict Colombia

All of these factors can propel violence after the conflict in every corner of the country, from the remote areas where the state has had a limited presence in recent decades, to the country’s intermediate cities and the large metropolises. Each of these and other forms of violence depend to some extent on the legacies of war and the conditions for peace in the post-conflict phase.

One possible case is the continuation of conflict violence or the reactivation of the armed conflict – that is, the confrontations and attacks resuming after the signing of the agreements. This may be the result of factions not involved in negotiations getting on with the fighting. Even during the negotiations, violence can be used to exercise power at the negotiating table and achieve certain results. This type of violence is carried out by saboteur groups, the so-called spoilers. This happened, for example, in Cambodia, where the signing of a peace agreement in 1991 did not entail the end of conflict violence. The continuation of conflict is common in so-called “fragile states”, where the conditions for peace are not guaranteed (such as in the Central African Republic and the Democratic Republic of Congo). In Colombia, although there has been some talk of dissidents, no violence has been reported, and it appears that the FARC are a cohesive enough guerrilla organisation to maintain the agreement.

Political violence can arise in order to obstruct the implementation of the agreements, to generate instability, or even to force a reconfiguration of power in the territories. The growth in death squads and vigilante groups which hounded activists after the Guatemalan conflict is an example of this form of violence. In Colombia, reports indicate that the murders of community leaders, human rights defenders, political party activists, and union members increased in 2015, and so far this year there have been murders and threats to activistsrelated to land restitution and pedagogy for peace. This risk is mainly related to a possible resurgence of paramilitary groups.

Disputes relating to property can arise between people returning to their land and squatters, state forces or even large landowners. In Colombia, there have been cases of violence against farmers who have returned to their land, as well as by criminal gangs who want to consolidate their power in the territories.

The failure of governments to provide justice and security can lead to the emergence of extralegal forms of policing and justice, such as lynching, social cleansing and the presence of vigilante groups and patrols. In Guatemala, lynching has been reported as one of the main legacies of war, mainly in the areas most affected by the conflict.

The type of violence that can most likely be expected in the post-conflict scenario is the continuation of activities related to organized crime. Dissident groups of the FARC, and any other group seeking to occupy the space left after the withdrawal of the guerrillas, will have some incentives to continue their profitable predatory activities in the territories. Armed groups also provide physical protection, economic benefits and create bonds of solidarity and identity between their members, which explains their continued existence and their continuing appeal to individuals who decide to join them. The Colombian Pacific region, particularly Tumaco, has recently experienced cases of selective violence associated with drug trafficking, highlighting the state’s limited capacity in regions where criminal economies remain strong.

The existence of an armed conflict also affects the level of interpersonal violence. Decades of high exposure to violence result in its normalisation and routinising. Socio-economic instability and lack of job opportunities and education create the conditions for a surge in crime. This, however, is not a direct legacy of war, but rather a consequence of peacetime conditions of instability. One source of concern in this respect is the possible flow of demobilised soldiers who may get involved in criminal activities in the cities. But studies made in Colombia have shown a very low recidivism rate in ex-combatants.

A form of interpersonal violence widely present in post-conflict contexts is domestic violence, specifically against women. This has been highlighted as a significant side-effect of conflict in East Africa. It has been found that former combatants who return home with stress disorders, who find a lack of work prospects, and experience a masculinity crisis are crucial factors for the increase of this form of violence in the post-conflict phase.

The post-conflict picture is thus a complex one. To ensure sustainable and lasting peace in Colombia, all of these factors associated with the termination of the conflict with the FARC must be addressed. But beyond this, a final reduction of violence in the country can only be achieved when violence generated by all actors, including the “other” guerrilla force – the National Liberation Army (ELN) -, criminal gangs, paramilitary groups and organized crime, as well as the factors determining the burgeoning of urban violence in the country, are addressed effectively.