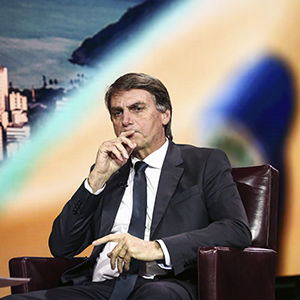 In the world’s most murderous country, gun control is starting to lose its appeal.

Desperate Brazilians are wondering whether they’d be better off armed, given that around 60,000 of their compatriots are killed each year. Polls show support for gun ownership gaining ground. In an election year, politicians are paying attention.
One of the candidates leading the field for October’s 2018 presidential election — hardline conservative Jair Bolsonaro — has promised to allow law-abiding citizens to arm themselves, a popular pledge in the nation with by far the most homicides of the entire world. Even before then, Congress may debate legislation to overturn the “disarmament statute,” a law that effectively bans civilian gun ownership, except in rare circumstances. The proposal would allow Brazilians with clean criminal records who pass psychological and firearm exams to buy up to six weapons.
“Everyday, everywhere you look, the criminal is armed with a high-powered weapon as the citizen tries to hide,” Rogerio Peninha Mendonca, the lawmaker behind the proposal, said in an interview. “What we want is for the citizen to be more capable of defending himself.”
The idea runs counter to recent calls in the U.S. for greater gun control, as well as the global trend towards restricting access to firearms that’s seen Australia, the U.K, Canada, New Zealand and Germany tighten their laws in recent decades.

Forty-two percent of Brazilians believe gun ownership is a citizen’s right, according to a November survey by pollster Datafolha. That’s up from 30 percent four years earlier. And of the lower house lawmakers who have expressed opinions publicly, slightly more than half support the proposed legislation, according to a scoreboard maintained by Peninha’s staff.

Fellow lawmaker Bolsonaro, a former Army captain, has been preaching the gospel of gun rights as part of his law-and-order pitch to voters. In polls he trails only former President Luiz Inacio Lula da Silva, who will likely be barred from running.

Brazil’s gun policy needs to change, Bolsonaro said at an event in Congress on March 7. He drew cheers from his supporters when he joked that the so-called “bullet caucus” of lawmakers united by their tough stance on crime should be renamed the “machine gun caucus.”

“Dictatorships only take root after disarmament programs,” he said.

Firearm homicides actually fell after the statute was introduced in 2003. It didn’t return to that year’s level for six years, according to the so-called Violence Map published by the Latin American Social Sciences Institute.

The “overwhelming” global tendency is toward more restriction for civilian gun ownership, and studies show that for every 1 percent increase to the number of firearms in circulation in Brazil, the homicide count would rise by 2 percent, according to Robert Muggah, research director at Rio-based security thinktank Instituto Igarape.

“Brazil’s pro-gun politicians are playing with fire. Rather than dismantling existing firearm legislation, they would be much better served by improving and enforcing existing laws,” Muggah said. “There is a very real danger that gun violence will escalate if the disarmament statute is repealed.”

But policymakers are under pressure to provide a quick fix to the rising violence. Last month President Michel Temer put the military in charge of Rio de Janeiro’s security forces, the first move of its kind since the end of Brazil’s dictatorship.

In 2017 there were 5,332 homicides in Rio state, according to official data. The state’s leading newspaper, O Globo, counted 632 victims of stray bullets alone in the first half of last year. And Rio doesn’t even make the list of the world’s top 50 most murderous cities — but 19 other Brazilian cities do.

So far, the army’s policing of Rio appears to have done little to improve security. On Wednesday night Marielle Franco, a local politician and human rights activist, was gunned down in her car, prompting some of the largest impromptu street protests in Brazil in years.

Most mainstream presidential candidates support maintaining the statute, according to a report by local paper Folha de S. Paulo. But until the government devises a way to stem the violence, much of Brazilian society will clamor for guns and force such politicians to defend their positions on the campaign trail, according to Nilson Leitao, head of the center-right PSDB party in the lower house.

“This radicalism is the fruit of a lack of results,” Leitao said in an interview at Bloomberg’s office in Brasilia. “I don’t want a gun in my house, because I have three kids. But a lot of people do, because of the alarming growth in violence.”