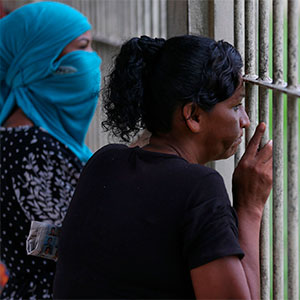 Brazil’s first days of 2017 were baptized by 17 hours of violence. Members of a drug ring called Familia do Norte (Family of the North) massacred members of the rival Primeiro Comando da Capital (First Command of the Capital), or P.C.C., one of the country’s largest gangs. The bloodletting occurred inside a privately administered prison in the northern city of Manaus. At least 56 people were slaughtered, and some 180 gang members escaped, 140 of whom are still at large. The state police were reluctant to intervene in the fight, fearing they might make the situation even worse.

The warning signs were written on the prison’s graffiti-lined walls. The penitentiary in Manaus has experienced bloody riots before. In the days leading up to the weekend massacre, prison guards suspected that firearms were being smuggled into cellblocks housing drug trafficking groups. A collection of revolvers was turned over to the police when the riot came to end.

Investigators unearthed a network of tunnels under the prison’s bloodstained floors, suggesting the attack was premeditated. Familia do Norte was sending a message: The P.C.C. is not welcome in the northern Brazilian state of Amazonas. A local judge was called in to negotiate the release of hostages, and he’s now facing death threats.

As shocking as the prison riot is, it is not unprecedented. The most lethal episode of prison violence in Brazil occurred in 1992 when 111 inmates were killed during a riot in the Carandiru prison in São Paulo. Other outbreaks occurred in Rondônia in 2002, Maranhão in 2010, Pernambuco in 2011, Rio de Janeiro in 2014 and Roraima last year. Prison violence has been registered in at least 24 of Brazil’s 26 states over the past decade.

Historically, violence followed demands for improved prison conditions. But the latest massacre in Manaus stems from a different cause. It signals the rupture of a longstanding truce between the São Paulo-based P.C.C. and Rio de Janeiro’s Comando Vermelho (Red Command), which is aligned with the Northern Family. These two gangs are fighting for control over the prison system and the cocaine trade.

Part of the reason prison violence is so common in Brazil is that conditions in most of the country’s penitentiaries are barbarous. There are an estimated 656,000 incarcerated people in state prisons, where there is officially space for less than 400,000. Yet roughly 3,000 new inmates are added to overcrowded penitentiaries each month. The prison population has increased by more than 160 percent since 2000. It’s for good reason that a former justice minister reportedly said he’d rather die than spend time in a Brazilian prison.

Brazil’s state prisons are overseen by drug gangs that act as judges, jurors and executioners. Most prisons are divvied up among competing gangs. The government is only nominally in control. Experts describe drug factions as a “parallel state.” Gangs have long recruited their rank and file from prisons and organize trafficking and racketeering businesses from within their walls. Research has found that 70 percent of inmates who leave prison find their way back.

Successive governments, the United Nations and human rights groups have described crumbling buildings where torture and sexual violence are rampant. Studies have found that incarcerated Brazilians are around 30 times more likely to contract tuberculosis and almost 10 times more likely to be infected with H.I.V. than the general population.

Most Brazilians tolerate this state of affairs, but this forbearance is shortsighted. Brazil’s prison wars routinely spill on to the street. In 2006, the P.C.C. unleashed a wave of attacks against law enforcement and penal personnel as a protest over prison conditions. Some 40 security agents were killed in riots in prisons and public spaces across São Paulo. The latest attacks in Manaus will surely inspire retribution inside and outside the prison gates.

Brazil’s penal system reflects wider inequalities. For one, it is fundamentally elitist. Felons who happen to have a university degree — business executives charged with corruption, for example — frequently enjoy better conditions and don’t have to share cells. Elsewhere, nonviolent first-time offenders are jammed together with extremely violent inmates. Most defendants cannot afford to hire a lawyer, and there is a chronic shortage of public defenders. Not surprisingly, those most likely to be killed while in custody are poor black males.

The leading cause of imprisonment is minor drug offenses, despite laws recommending that nonviolent crimes and possession not result in jail time. Judges and prosecutors favor heavy-handed prison sentences over rehabilitation or alternative sentencing arrangements. Brazilian politicians lack the political and moral resolve to do the right thing. Nor are they feeling any pressure from Brazilian citizens. A 2015 poll found that 87 percent of Brazilians favor lowering the criminal age of responsibility to 16 from 18. Public complacency ensures that prison violence continues unabated.

What is needed now is courageous leadership. Alexandre de Moraes, the minister of justice, has already announced some remedial measures in the wake of the Manaus massacre. He is planning to transfer gang leaders from state to federal prisons, which are better managed. But this is only an interim solution.

For Brazil to reform its prisons, it needs to reduce both the stock and flow of inmates. The first priority is to diminish the bloated caseload of pretrial detainees. Federal and state-level judges, prosecutors and public defenders should set up task forces to immediately resolve outstanding cases. Next, Brazil’s juvenile justice system is as rotten as the one for adults and needs to be fixed. Mayors must assume a much greater responsibility in rehabilitating first-time offenders. Support for at-risk adolescents can reduce their likelihood of becoming gang members in adulthood.

The government urgently needs to regain control of public security, and the prison system in particular. Rather than imposing more draconian laws and building new prisons, Brazil needs to enforce existing legislation — including ensuring that suspects are provided hearings within 24 hours of their arrest and expanding the network of public defenders.

This is not just about ensuring the humane treatment of inmates. Strategies to decriminalize drugs, ensure proportional sentencing and provide rehabilitation for offenders are vastly more cost-effective than putting nonviolent offenders in jail and throwing away the key.