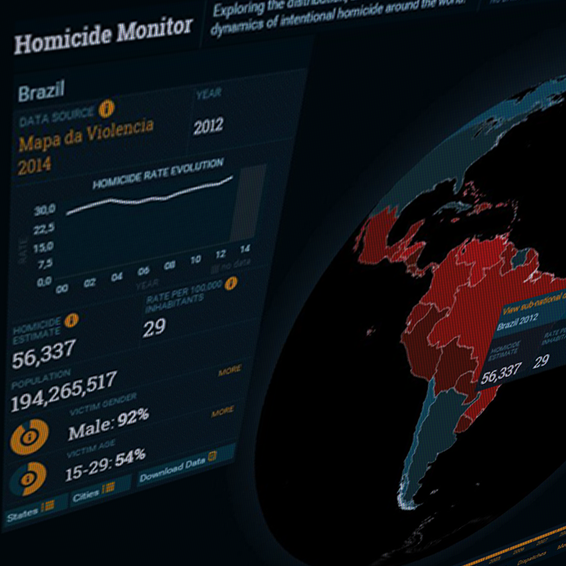 There are hundreds of thousands of homicides a year around the world, but limited public debate on the issue. A new online data visualization launched by the Igarapé Institute intends to change this. Called the Homicide Monitor, it registers between 437,000 and 468,000 homicides a year, more than 6.2 murders per 100,000 people. In some countries and cities, homicide is the leading cause of death for young people. In others, homicide is virtually non-existent.

The Homicide Monitor is a digital application that shows the global spread of homicide. It reveals that just a small number of countries account for a disproportionately large share of the global burden of murder. Specifically, in 2012, 2 out of every 5 people violently killed each year around the world was a Brazilian, Colombian, Mexican or Venezuelan. Latin America and the Caribbean are at the epicenter of the homicide problem with just 8% of the world´s population, but 33% of all murder.

The Homicide Monitor exhibits the distribution, dimensions and dynamics of homicide around the world. It describes the total number of homicides per country, their frequency per 100,000 people, and where data is available, the breakdown by gender and type of weapon. It includes data for more than 219 countries and territories from between 2000-2012. And for Latin America and the Caribbean, it includes subnational data on states and cities with populations over 250,000 people.

A key area affected by homicide is Brazil. There the homicide count in 2012 was 56,337 people or a rate of 29 per 100,000. Approximately 92% of the victims were male and 54% concentrated in the 15-29 age group. Homicide is the number one cause of death for that age group. According to Robert Muggah, research director of the Igarapé Institute, “the country is ground zero for homicide in the world – one in ten people killed annually is a Brazilian.”

The Homicide Monitor is intended to provoke reflection and stimulate debate. According to Muggah, “security is the number one responsibility of governments and the first right of citizens.” The tool is intended to target decision makers, practitioners, scholars and journalists”. For most countries, only national-level data is presented. But for the 40 countries and territories of Latin American and the Caribbean – the most violent region in the world – multiple levels of data are exhibited, including at the national, state and city scale.

The goal of the Homicide Monitor is to draw attention of leaders and decision-makers to the epidemic of murder affecting large parts of the world, especially Latin America and the Caribbean. While the Monitor includes data on all countries around the world, this year the Monitor focuses on those areas most badly affected, especially Latin America and the Caribbean. In the coming years the Institute will be adding subnational data for Africa and other parts of the world where homicide rates are high.

The Homicide Monitor will also devote special attention to “what works” in preventing and reducing murder. Already the Igarapé Institute has lined up some of the world´s leading criminologists and public health experts to analyze the challenge, but also solutions with a solid track-record. Beginning in June 2015, short articles will consider the evidence from across Latin America and the Caribbean, but also in North America and Western Europe where homicide has dropped by 40% over the past two decades.

While hotly debated, there are several factors that explain the decline in homicide in wealthy, but also many middle-income countries. On the one hand there are structural causes – reductions in family size, improved access to education, improvements in social welfare, and declines in rapid urbanization. There are also institutional reasons, not least improvements in law enforcement and the effective application of “hot spot policing”. Hot spot policing employs data to identify high-crime areas of a city, allowing human and material resources to be deployed to specific neighborhoods, streets and even buildings where homicide has or is likely to occur.