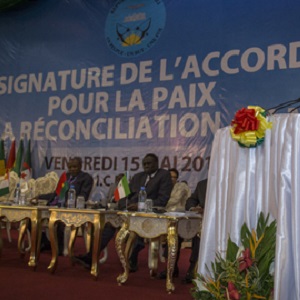 More than two and a half years since its signature in Bamako, the agreement for peace and national reconciliation between the government of Mali, the Coordination of the Movements of Azawad (CMA), and the Plateforme coalition is at a standstill. Particularly by failing to deliver on its key promises, the effectiveness of initiatives that were once deemed as key innovations from the Malian peace process, like the Agreement Monitoring Committee (CSA, Comité de suivi de láccord), are now under threat.

Previous Malian peace processes were characterised by mistrust and defiance between the parties, and their limited buy-in on the implementation of the agreements after signature. As a result, the CSA was created in 2015 to establish, for the first time in Mali, a trust-building mechanism that would provide guarantees to the parties of the effective implementation of the agreement’s provisions. The CSA is composed not only of the signatory parties, but places a central role to other countries in the region (as in for instance, through the role of Algeria and other G5 Sahel Countries) and international community stakeholders (for instance, the United Nations and the African Union).

There are several reasons why the innovative design of the CSA has not lived up to its expectations. First, there is an increasing perception of a lack of inclusion of the population and civil society groups in the works of the different sub-committees of the CSA. Second, there is an increasing sense that the peace agreement, as well as the CSA, does not sufficiently include in its activities dissident armed groups that emerged since the signature of the agreement.  Finally, within the day-to-day management of the CSA there are deep disagreements among the signatories about key priorities and modalities of implementation of the agreement. The CSA, despite its importance, is a “monitoring” committee and not an “implementing” one. Therefore, the CSA is dependent on the three signatories to push the process forward, as they are ultimately responsible for implementing the agreement.

An example of such divisions and increasing demands for inclusivity was seen on 15 and 16 January 2018, during a meeting of the CSA. On this occasion, women civil society organizations (CSOs) protested against the lack of inclusivity of the CSA, especially regarding the limited (or almost inexistent) female representation in the process. They demanded that  the CSA conforms to the 2015 Malian law on gender representation in elective and nominative bodies, and include at least 30% representation of “either sex” in its sub-committees. While it is difficult to assess whether the women groups’ demands will be successful, they echo the frustrations from several corners of the Malian political landscape regarding the need for more inclusivity in the negotiation processes and the agreement implementation.

It was argued to the ISS in Bamako that beyond the inclusivity issues, another challenge is the lack of a meaningful public engagement with the broader public about the agreement. This can be seen not only in relation to the basic terms of the agreement, but also how it could benefit the population in terms of governance, security, and socio-economic development. As a result, in places such as Gao, Kidal or Timbuktu, the population does not necessarily feel represented by groups belonging to the CMA or the Plateforme who, through the agreement, are central in defining the future governance of the northern regions.

Thus, the growing distance between the CSA and the larger polity in Mali, has led to its negative perceptions by local and national stakeholders. It was anecdotally mentioned in interviews to the ISS that the CSA’s monthly meetings are occasions for representatives of the signatory groups to simply benefit from substantive per diems, while northern and central regions of Mali face insecurity and limited governance. While such characterization cannot be confirmed, it is somehow illustrative of the limited engagement between key implementers and beneficiaries of the agreement.

Thus, in order to become more effective, the CSA should broaden the scope of actors that are included in the efforts of monitoring and implementing the agreement. This would contribute to fostering an environment where a variety of stakeholders feel that their interests in the implementation of the agreement are included and recognized. More could also be done to ensure there is more information, participation and accountability on the different CSA mechanisms. Inviting representative groups of society, including those working on local mediation, to the CSA’s monthly meetings could contribute to bridging the gap between the population and the actors of the peace process.

The CSA shows that innovation on paper doesn’t necessarily translate well into practice if it is not tied to effective and meaningful responses. It is clear that by creating such a mechanism for the first time, the CSA brings a key element of innovation to the conflict prevention realm in Mali. But it is also clear that the process still has a long way to go towards addressing critical issues regarding inclusivity- especially women- and political will towards the agreement’s implementation. If this is done, it could show how innovative approaches could be better linked to effectively contribute to meaningful conflict prevention approaches in Mali.