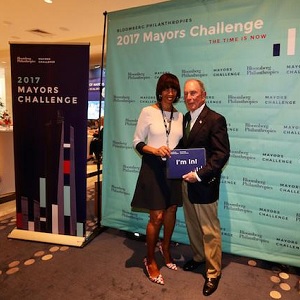 It´s time for cities to lead

If the test of successful political leadership could be distilled to a single issue, the fight to safeguard our climate would be a strong candidate. With President Trump withdrawing the US from the Paris Climate Change Agreement (COP21), he abdicates a claim to serious leadership. Instead, he has vastly diminished the power and prestige of the US. And in the process, he has imperiled Americans, and citizens everywhere.

Climate change is real and its impacts will be far-reaching. There is scientific consensus on the relationships between carbon emissions and spiraling temperatures above and below the oceans. There is already evidence of rising sea levels, flooding, heatwaves and worsening population health, including in the US. There is no possibility of making America great again on a dead planet.

Trump’s abdication of leadership on climate change is more than the failure of a deeply flawed individual. It is symptomatic of a dysfunctional international political system organized around nation states. Our national political leaders are increasingly unable to safeguard and protect us, let alone provide a positive vision and lead us to a better future. It is time to re-balance the global system from national to urban sovereignty.

A global devolution revolution is already under way. In 2016, a Global Parliament of Mayors was created precisely to empower an international network of cities. The Parliament’s founder, the late Dr Benjamin Barber, set out an optimistic yet pragmatic vision in his new book – Cool Cities, Urban Sovereignty and the Fix for Global Warming. Barber described nation states as dysfunctional and constrained by rigidly ideological national party politics:

The Global Parliament of Mayors does not fit neatly into a nation state model of global governance. Indeed, President Trump’s pull-out of COP21 underlines that the model itself is broken. The re-calibration of sovereignty from national to city leadership is no longer just a novel idea, it is essential. After all, city leaders are at the coal face of monumental planetary challenges such as climate change, migration, inequality in ways that national authorities simply cannot engage or deliver.

Notwithstanding the announcement by President Trump, 200 US cities and over 1,400 companies have already committed to “honor and uphold” COP21. While a powerful signal of city leadership, it is not without precedent. In 1997 when Washington D.C. refused to ratify the Kyoto Protocol, hundreds of US cities committed to meeting its targets. In 2005, former London Mayor Ken Livingston convened a gathering of 18 city leaders that would go on to become the C40 Cities Climate Leadership Group, now one of the most powerful urban advocacy networks in the world.

This sort of city leadership is not confined to climate change. Throughout 2017, dozens of so-called Sanctuary Cities have defied President Trump’s efforts to have them detain undocumented migrants, irrespective of whether or not they are suspected felons. In the UK, Cities of Sanctuary are also working to find ways to care and support asylum seekers. And British cities are exploring ways they can remain active participants in the EU irrespective of their national government’s fortunes in negotiating a Brexit that is good for Britain.

City leadership needs to go global. It is not enough for cities to simply be given the space to undertake activities within their municipal boundaries. Cities need the resources and platform to shape the global context in which they operate. Mayors and city leaders are under no illusion that they will receive support from national governments to do this. To the contrary for cities to genuinely unlock the potential of a new urban agenda, at least three conditions must be met.

Second, multilateral organizations such as the United Nations, World Bank, World Trade Organization and European Union need to accommodate cities. They must adjust to ensure formal representation of city level leaders sitting alongside and equal to national leaders. It is worth recalling that cities like New York, London, Paris, Seoul and Tokyo have economies larger than most nation states. Cities represent a layer of governance, not a topic to be discussed. They must be treated and heard accordingly.

Third, foundations, trusts and businesses would be wise to start investing in global inter-city networks. Global political and economic power is increasingly mediated through thousands of cities around the world. Yet city leaders and their teams still face difficulties when undertaking diplomacy, including legitimate questions about international travel. National politicians face no such criticism. Getting the city voice to the table will require resourcing.

There is a glaring failure of national political leadership, and it has real world consequences. Mayors feel these impacts immediately. Now is the time for cities to lead.