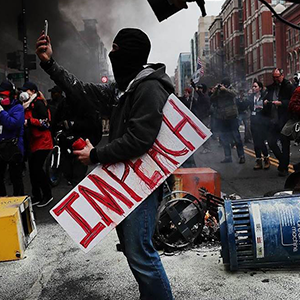 Is Liberal Democracy in Retreat?

Although democracy has spread from one country to more than 100 countries in the space of two centuries, it has also suffered setbacks along the way, and continues to face resistance to this day. Democracy, after all, is not inevitable, and yet it remains the best system of governance compared to the known alternatives

Though some countries (and cities) are faring worse than others, the world is becoming safer and more prosperous overall – hard as that may be to believe. This is especially true of democratic countries, which stand out for their higher rates of economic growth and higher levels of wellbeing. Democracies also tend to have fewer wars and genocides, virtually no famines, and happier, healthier, better-educated citizens.

The good news is that a sizeable majority of the world’s population now lives in a democracy. Yet in some of them – not least the United States – the rise of populist, nativist political parties and leaders with authoritarian tendencies has created an unmistakable sense of pessimism, leading many to fear for the future of democracy. Are people right to be worried?

Many people forget that liberal democracy is a relatively new idea. Most of its core precepts – the separation of powers, human rights, civil liberties, freedom of speech and assembly, pluralistic media, and free, fair, and competitive elections – did not genuinely take hold until the twentieth century. Until a few hundred years ago, most societies had swung between anarchy and various forms of tyranny.

Governments before the modern era brought about only marginal improvements in the lives of their subjects, whom they often kept in check through brutal repression. Ruthless despotism endured in most places, because the alternative – a Hobbesian state of anarchy – was even worse. The emergence of democracy was far from inevitable.

In fact, the spread of democratic governments after the eighteenth century was a rather stop-start affair. According to the late Harvard University political scientist Samuel P. Huntington, it came in three waves. The first began in the nineteenth century, led by the US, which had developed a system of constitutional democracy that was widely admired for its checks on executive, legislative, and judicial power and privilege. Throughout the nineteenth century, Western European countries, in particular, emulated the US model. By 1922, there were some 29 democracies in existence around the world, though that number would fall to 12 by 1942.

The second wave, according to Huntington, came after the Allied victory in World War II, and crested in 1962, when there were 36 democracies around the world. Again, the wave would ebb somewhat. By 1975, the number had fallen to 30, owing to communist takeovers and pushback from authoritarian regimes in Europe, Latin America, Africa, the Middle East, and Southeast Asia.

The third wave was more of a tsunami. Military and fascist governments fell left, right, and center throughout the 1970s and 1980s. After the fall of the Berlin Wall in 1989 and the implosion of the Soviet Union in 1991, the number of democracies worldwide effectively tripled. By the start of US President Barack Obama’s administration in 2009, there were 87 democracies worldwide.

Looking back, the immediate post-Cold War period seems like a Golden Age of democratic consolidation. But it was also a time when the staggering pace of change fueled new concerns about the genuine health of many newly democratic governments.

Today, confidence in the forward march of democracy is dimming. Scholars speak grimly of how democracies are suffering from “undertow,” “rollback,” “recession,” and even “depression.” Others worry that democracies are hollowing themselves out and becoming “partial,” “low-intensity,” “empty,” and “illiberal.” In these cases, elections still take place, but civil liberties and checks on power are flouted.

Moreover, the failure of the 2003-2005 “color revolutions” in Georgia, Ukraine, and Kyrgyzstan were highly demoralizing, as was the failure of the 2010-2011 Arab Spring in Egypt, Libya, Syria, and elsewhere in the Middle East and North Africa. Even more recently, authoritarian governance in new democracies such as Hungary, Poland, and Turkey, and in old democracies such as the US, have set off alarm bells. And an unrelenting flood of negative headlines in other democracies has reinforced the sense that illiberalism and nationalist populism are resurgent. Watchdog groups such as Freedom House are convinced that the world has become increasingly less free.

A spate of new books has added to the creeping sense of doom. In How Democracies Die, Steven Levitsky and Daniel Ziblatt of Harvard University argue that democracies usually end not with a bang, but with a whimper, as demagogues like President Donald Trump in the US gradually undermine checks and balances.

Likewise, in The People vs. Democracy, Harvard’s Yascha Mounk warns that liberal democracy is giving way to “undemocratic liberalism” and “illiberal democracy.” The former protects basic rights but delegates real power to unelected technocratic bodies like the European Commission. The latter features democratically elected leaders who ignore minority rights. More generally, Mounk and others fear that young people, including in the West, are turning away from democracy.

What the Data Show

And yet there is reason to doubt that democracy is in retreat around the world. For starters, there is no clear evidence of a dramatic decline in support for democracy across most countries, including in the US. This does not mean that today’s uptick in the number of autocracies should be ignored; but it does suggest that the elegies for democracy may be premature.

Polls that show declining global support for democracy should also be interpreted with some skepticism. After all, it is hard to discern people’s appetite for democracy in countries ruled by authoritarian regimes, where respondents must be careful about publicly declaring such positions.

In fact, research from the Center for Systemic Peace’s Polity Project suggests that the great third wave of democratization, far from receding, may eventually give way to a fourth wave. As of 2015, the latest year for which Polity Project data are available, there were 103 democracies worldwide, accounting for over half of the global population. Add the 17 countries classified as more democratic than autocratic, and the share of the population living in democracies increases to two-thirds. By comparison, a mere 1% of the population lived in democratic countries in the early 1800s. Even when acknowledging that there are many shades of democratic governance, this statistic alone should give pause to democracy’s doomsayers.

To be sure, the resilience of democracy must not become a source of complacency. The continued spread of democratic governance is far from guaranteed. When disaggregated by levels of pluralism, political participation, and respect for civil liberties, several democracies show unmistakable signs of backsliding. According to the Economist Intelligence Unit’s Democracy Index, just 19 countries, most of them in Western Europe, can be described as “full democracies,” as opposed to “flawed democracies,” “hybrid regimes,” or “authoritarian regimes.” Of the 167 countries in the index, 89 registered signs of deterioration in 2017 compared to the previous year.1

Among the countries slipping toward authoritarianism are a few recent democratic converts such as the so-called Visegrád Group: the Czech Republic, Hungary, Poland, and Slovakia. The Philippines, led by another illiberal populist, Rodrigo Duterte, is steadily removing liberal constraints. Some of the populist leaders in these countries have taken inspiration from other elected strongmen, such as Recep Tayyip Erdoğan in Turkey and Vladimir Putin in Russia.

These countries’ experiences show that, while democracy is still favored by most of the world, it is hardly the only model of government. Likewise, theocracies in the Islamic world and authoritarian capitalism in China offer alternatives that are attractive to autocrats and populists because they can generate certain economic advantages in the short term.

Still, in the face of all these existential threats, it is worth remembering that democracy has been so successful not just because of procedural institutions such as elections or checks and balances, despite how crucial these institutions are. It could be, to paraphrase Winston Churchill, that despite its many flaws, democracy is still preferable to the alternatives. Democracies, after all, allow people to dismiss their representatives without resorting to bloodshed.

As John Mueller of Ohio State University notes, well-governed liberal democracies give people the freedom “to complain, to petition, to organize, to protest, to demonstrate, to strike, to threaten to emigrate or secede, to shout, to publish, to export their funds, to express a lack of confidence.” And, even better, the “government will tend to respond to the sounds of the shouters.” Mueller reminds us that even the most mature liberal democracies are works in progress that need constant grooming and improvement. At the most basic level, successful democracies are those that protect the citizenry from violence and the seductive airs of strongmen claiming that they alone represent the people.

For a democracy (be it presidential, parliamentary, or constitutional-monarchical) to flourish, citizens must be convinced that it is a better alternative to theocracy, the divine right of kings, colonial paternalism, or authoritarian rule. Over the past few centuries, people around the world came to recognize that it is, and the idea of liberal democracy thus became contagious.

Despite their limitations, democracies have proved remarkably effective at curbing the more sinister instincts of governments. Consider human rights, which have been widely codified since 1948, when the United Nations adopted the Universal Declaration of Human Rights. One might similarly reflect on capital punishment, which used to be the global norm. The latest projections suggest that capital punishment could be abolished completely around the world in less than a decade.

Such profound changes are a reminder of why we must fight for free and fair elections, the rights of minorities, freedom of the press, and the rule of law. While many democracies have faced a crisis of confidence in recent years, their extraordinary victories – and their continuing superiority to the alternatives – continue to represent grounds for optimism.