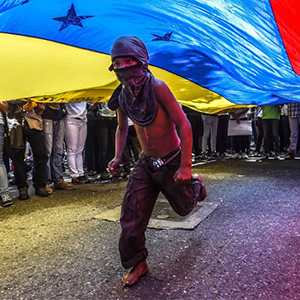 How to Avoid a Venezuelan Civil War

Venezuela is careening toward civil war. Political and criminal violence is spreading like wildfire and the capital city, Caracas, has become one of the world’s most violent. At least 130 people were killed and another 3,500 injured in anti-government protests over the past four months. Tens of thousands of Venezuelans have fled to neighboring countries, Brazil and Colombia, in search of refuge. Meanwhile, most countries in the region are quietly preparing contingency plans to deal with the blowback. That won’t be enough: if full-on armed conflict is to be averted, a far more robust response is needed.

Venezuela’s democratic institutions are under assault. Since President Nicolas Maduro was elected in 2013, thousands of his opponents have been arrested. Over 430 of them were jailed, many of them after trials in military courts. This month has seen the imprisonment of two top opposition leaders, prompting widespread condemnation in Venezuela and abroad. Even judges are feeling vulnerable: a number of them recently sought asylum in the Chilean embassy. Meanwhile, government-supported vigilante groups are patrolling the streets and harassing citizens, and anti-government opposition groups are manning barricades across the country.

Maduro is consolidating his authoritarian hold. Earlier this year, the Supreme Court, which is stacked with government loyalists, attempted to strip the opposition-controlled National Assembly of its powers: the decision was reversed, with opponents accused Maduro of staging a coup. In July, bands of plain-clothes government supporters, with the tacit support of the military, stormed the National Assembly, physically attacking lawmakers and journalists. Maduro subsequently announced the formation of a new Constituent Assembly, tasked with rewriting the constitution. The opposition instantly denounced the move, and then boycotted a government-sponsored referendum on the assembly in July.

The referendum on the Constituent Assembly vote was marred by violence. At least 100 voting booths were destroyed across the county and a police motorcycle convoy in Caracas was hit by an explosion. The minister of defense, Vladimir Padrino Lopez, deployed a 130,000 person security force to “actively contain” flare-ups across the country. Meanwhile, the chief executive of Smartmatic, the company responsible for providing the platform for Venezuela’s voting system, said the vote was manipulated. Maduro stands accused of inflating the votes by at least one million ballots. Venezuela’s chief prosecutor, Luis Ortega Diaz, opened an investigation into the vote but was ousted and detained days later.

It is unclear how far Maduro can go, since domestic and international support for his government is crumbling. According to a recent poll by Dalia Research, Maduro has an 86 percent disapproval rating, and 65 percent of Venezuelans say that they intend to support ongoing protests. Political polarization is increasing, with daily violent confrontations on the streets. Meanwhile, more than 40 governments—from Argentina to Canada—have rejected the results of the recent referendum. This did not deter the Constituent Assembly from meeting in August and selecting its head, former Foreign Minister Delcy Rodriguez. The next order of business is to strip opposition lawmakers of their constitutional immunity from prosecution.

There are ominous signs of dissident military and police rebelling against the government. In late June, a rogue police officer commandeered a government helicopter and attacked the Supreme Court with gunfire and grenades. Almost exactly a month later, Venezuelan troops claimed to have quashed a mutiny at a military base in the Carabobo state. The mutineers said that they intended on “restoring constitutional order,” whereas Maduro described it as a “terrorist attack.” In both cases, uniformed personnel posted videos on social media claiming to stage an insurgency Maduro regime. Open conflict could flare if a mutiny gathers critical mass within security forces, or if vigilante groups armed by the government begin openly clashing with opposition groups.

TROUBLE IN THE NEIGHBORHOOD

The international response to the crisis has been tepid. Some Latin American governments have publicly condemned Maduro and his crackdown on the opposition. Colombian President Juan Manuel Santos denounced the Constituent Assembly and described the removal of Luisa Ortega as the “first dictatorial act” of an “illegitimate” institution. Others registered their objections through regional organizations, such as the Organization of American States (OAS), the Union of South American Nations (UNASUR), and the Common Market of the South (MERCOSUR), which suspended Venezuela last year.

Some governments on the left have either remained silent or have publicly supported the Maduro regime. The Bolivarian Alliance for the Peoples of Our America (ALBA), composed of 11 countries including Bolivia, Cuba, and Nicaragua, issued an open statement blaming Venezuela’s descent into chaos on U.S. interference. A handful of left-leaning politicians, such as Brazilian deputy Jean Wyllys, have broken rank, warning that Maduro is out of control. Elsewhere in Latin America, there is considerably less sympathy for Maduro and his brand of Chavismo than in the past. The political climate in Latin America has changed considerably since left-leaning regimes dominated the scene a decade ago: the political pendulum has shifted towards the right, especially in Argentina, Brazil, and Peru.

Many of the world’s most intractable armed conflicts were triggered by far less dramatic circumstances than the current crisis in Venezuela.

Although most governments in the region have appealed for a peaceful resolution to the political impasse, few are offering concrete solutions. Back in April, Argentina, Brazil, Mexico, and at least ten other governments demanded that Maduro set a timetable for elections, recognize the National Assembly, and free all political prisoners. Maduro ignored them. When the OAS voted to hold a high-level meeting to discuss the emergency, Maduro threatened that Venezuela would leave the organization. So far, Venezuela remains a member, but its Foreign Minister, Samuel Moncada, accused OAS Secretary General Luis Almagro of “staging a coup d’etat” and stirring-up civil unrest in Venezuela. More recently, Maduro accused Colombia, Mexico, and the United States of conspiring to oust him from power. Washington, in response, has slapped sanctions on Maduro, whom it labels a dictator, to ramp up pressure on the regime.

The United Nations’ approach has been even less active. The organization has stated that solutions to the Venezuelan crisis cannot be imposed from the outside. The reality is that the UN is focused heavily on armed conflicts elsewhere, especially in Africa, the Middle East, and Central Asia. And, given substantial budget cuts implemented after the US reduced its contributions, the UN cannot afford to take on another large-scale mission. For now, the organization is opting for strategic patience. Its refugee agency, the UNHCR, is not ready to manage a massive outflow that would follow an implosion in Venezuela.

BRING IN THE GUARANTORS

Latin America has a long history of conflict prevention and resolution. In a recent example, Chile and Peru settled a longstanding maritime dispute through the International Court of Justice, in 2014. Although it has no explicit mandate for preventing conflict, the OAS has also played a role in mediating territorial disputes between Belize and Guatemala, Honduras and Nicaragua, and Guyana and Surinam. UNASUR also mediated a dispute between Colombia and Venezuela, in 2010. As important as these international and regional mechanisms are, many of Latin America’s flare ups have been eased through even more localized efforts.

For example, in the 1980s, Argentina and Brazil resolved their geopolitical rivalry, which included a nuclear arms race, bilaterally through a series of mutual confidence-building measures. The process culminated in the formation of new verification mechanisms and led to the voluntary dismantlement of both nuclear arms programs. Likewise, Argentina, Brazil, Guatemala, and Peru, among others, all created Truth and Reconciliation commissions to deal with past traumas and promote positive peace. There is no shortage of creative and effective tools in the region to help de-escalate tensions and avoid descent into war.

Arguably the single most potent conflict prevention innovation, coming out of Latin America in the past few decades, is guarantor states. Since the 1980s, guarantor states (in partnership with multilateral organizations) have played a central, if discreet, role in shaping peace processes. Far from being passive bystanders, guarantors help jumpstart negotiations, build confidence among parties, manage logistics and resources, provide expertise, and more generally, lend momentum and credibility to peace talks. Occasionally, they also provide solutions to impasses, albeit very quietly and usually only on request. They are distinct from mediators, which act as third parties to actively assist negotiations to end a conflict. Instead, guarantors ensure that the terms of the negotiations and a final agreement are met. They are often unencumbered by the rigid protocols and divisive politics of regional organizations.

Latin American guarantors have a decent record of facilitating negotiations in both inter-state and internal conflicts. In 1998, the treaty ending a century-old dispute between Ecuador and Peru had the support of four guarantors; Argentina, Brazil, Chile, and the United States. Meanwhile, in Colombia, after repeated failures to broker a peace deal with the FARC, four countries—Cuba and Norway as guarantors, and Venezuela and Chile as facilitators—adopted a new approach. As for Colombia’s National Liberation Army (ELN) in Colombia, six guarantor states (Brazil, Chile, Cuba, Ecuador, Norway, and Venezuela) have served as witnesses and sounding boards, gently pushing talks with Bogotá along. Guarantors are no panacea, of course, especially if parties are staunchly opposed to any form of dialogue.

Venezuela is dangerously close to slipping over the precipice. Many of the world’s most intractable armed conflicts were triggered by far less dramatic circumstances than the current crisis in Venezuela. The consequences of a full-blown civil war would be dramatic for the region, with potentially dramatic spillover effects. As hard as it is to imagine, there is still a window of opportunity for preventive diplomacy. The mobilization of guarantor states would be especially palatable for Venezuela, since any negotiations would be nationally-led, as in the case of Colombia. Guarantors could help catalyze and advance dialogues between the Maduro regime and the opposition.

Given testy relations between Venezuela and its neighbors, the process will be challenging. Even so, some countries, including Cuba, have accumulated considerable experience in facilitating dialogue through guarantors. It is also worth recalling that Venezuela served as a guarantor state for Colombia’s complex peace process, in spite of extreme political differences between former Venezuelan President Hugo Chavez, Maduro, and the government of Colombian President Manuel Santos. It may be time for Colombia to consider reciprocating, and for Venezuela to consider accepting. And, in spite of political and economic turmoil at home, Brazil could also play a constructive role, whether by hosting dialogues or by continuing to reform its refugee and immigration capabilities.

While the path ahead is uncertain, an exit is still possible. It may involve high-level closed talks facilitated by Cuba and a collection of other countries in the region. Perhaps a trusted regional entity, such as the Community of Latin American and Caribbean States (CELAC) or UNASUR, could play a support role, as Ecuador has suggested. Whatever states and entities come to the table, they can bear witness, host talks, catalyze new thinking, build bridges, and accompany the process. The point is that Latin America is a region rich with experience in resolving its own tensions. It is time for Latin American solutions to Latin American problems.