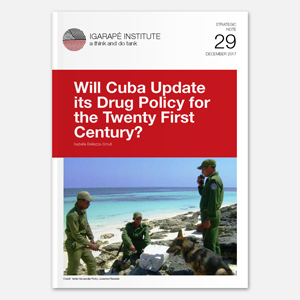 Cuba has one of the lowest violence rates in the Caribbean and Latin America. However, when it comes to drugs, it has one of the more punitive policies in the region – policies that have contributed to tremendous violence in neighboring countries. The new publication by Igarapé Institute discusses an alternative agenda for Cuba’s drug policy that could best keep its citizen safe and healthy in an evolving national context, avoiding the negative collateral effects of prohibition seen across the region. “Will Cuba Update its Drug Policy for the Twenty First Century?” will be launched on this thursday, December 7.

“The overwhelming failure of these policies across Latin America and the Caribbean would suggest that Cuba’s unprecedented success may be more appropriately attributed to certain unique national conditions than to its drug policy”, says the author of the publication, researcher Isabella Bellezza-Smull.

The article draws a complete storyline of Cuban drug policy, from the 1950’s to present, analyzing the coexistence of “mano dura” and prohibition with multi-sector prevention and treatment efforts.

“Despite its successes, Cuba faces a number of challenges with respect to illicit drugs. If Cuba continues to increase tourism and diversify its foreign trade, the possibility of drugs – and recreational drug cultures – reaching Cuban shores will increase, putting further stress on the country’s “just-say-no” approach”, adds Belleza-Smull.

Harm-reduction measures and alternatives for incarceration are recommended, says the author

Cuba’s robust public health, educational, and community-based institutions — the basis of protective factors related to drug abuse — afford the country an opportunity to adopt a more progressive approach to drug control. The CND (National Drug Commission, or Comisión Nacional de Drogas) remains publicly committed to prohibition and fighting illicit drugs, but there are also signs that alternative strategies are being considered.

Cuba’s leading research center for drug treatment, the Centro para el Desarrollo Académico sobre Drogodependencias (CEDRO), is beginning to explore harm-reduction measures as an alternative to abstinence-based approaches. Its coordinator has affirmed that “not everyone who comes to consultation is willing to assume abstinence.”

Decriminalization of drug-use and possession appears unlikely, even though studies in other countries show it reduces high-risk behaviors that spreads infectious diseases and death from overdose, the diversion of law enforcement resources from serious criminality, and exploding prison populations.

“More likely, Cuba’s debate will touch on adopting harm-reduction measures to treat and prevent problematic drug use, and investing in alternatives to incarceration for nonviolent, low-level participants in illicit drug markets involved in production, transport, and sale”, says the author.

The publication is online and can be viewed in: https://igarape.org.br/en/will-cuba-update-its-drug-policy-for-the-twenty-first-century