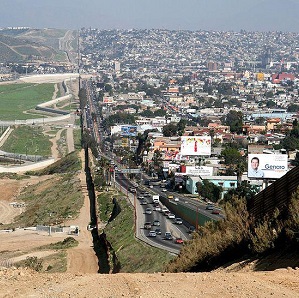 Here’s What Violence Along the U.S.-Mexico Border Really Looks Like

This article is published as part of the campaign Instinto de Vida.

Part of the justification for President Donald Trump’s “great wall” is that it is needed to keep America protected from what lies below – northern Mexico is rife with drug violence and there exists a very real risk of that violence spilling over into American cities and towns.

But the dynamics of the drug trade – and the numbers – point to a different reality.

At the Igarapé Institute, we’ve compiled the most up-to-date official homicide data from both sides of the border. The results show that towns along the U.S. side are among the safest in the country; northern Mexico, meanwhile, is one of the most violent places in the hemisphere. They also suggest that the threat of spillover violence is unlikely to increase or decrease with the presence of a physical wall.

In 2015, the average homicide rate in the 23 U.S. border counties was 3.2 murders per 100,000 inhabitants, lower than the national homicide rate for the same year, 5.3 per 100,000 habitants. U.S. City Crime Rankings does not list a single U.S. border city among the 60 most dangerous metropolises in America. Meanwhile, in the same year the 35 Mexican border municipalities had an average rate of 20.8 per 100,000, that is, 6.5 times more than its northern neighbor.

Is the physical barrier that already exists between the U.S. and Mexico responsible for “keeping America safe?” Not likely. Drug cartels already operate on both sides of the border (that’s what their business is based on) and guns and ammunition are easier to come by in the U.S. than they are in Mexico. Rather, the border dynamic is costlier for Mexico than it is for the U.S. because limited points of access to U.S. markets generate violent competition between those who wish to control them. In other words, the border itself is part of what makes northern Mexico so violent. As Ioan Grillo, author of Gangster Warlords has argued, the wall only makes illegal transactions more expensive, which in turn gives more money to criminal networks.

This dynamic is even more evident when examining violence levels over time. Omar García-Ponce and Hannah Postel of the Center for Global Developmentin Washington, DC, demonstrated how in the past two decades the US homicide rates have remained consistently low, while the Mexican side has always been more violent, with murder rates fluctuating between 15 and 20 homicides per 100,000. According to García-Ponce and Postel, between 2007 and 2010, this murder rates spiked drastically, coinciding with violent territorial disputes among drug cartels and between these and the Mexican government’s militarized response.

The most recent data show that this trend changed between 2011 and 2015, with a consistent drop in homicide rates on both sides of the border. During those five years, the average homicide rate in the Mexican border municipalities decreased from 38.6 (2,692 murders) to 20.8 (1,529 murders). At the same time, in the US counties along the border the homicide rate fell from 3.9 (393 murders) to 3.2 (339 murders). This could, at first glance, suggest a positive relationship between violence on either side of the border – but while this drop in violence in Mexico was accompanied by a (smaller) drop in the U.S., spikes in murders south of the border to not show a similar correlation to rising violence north of it.

The bad news is that the situation in Mexico has changed during the last year. In 2016 the homicide rate in the border municipalities rose again, with an increase from 20.8 per 100.000 inhabitants to 26.5 – six points in just 12 months. This change is related to the gradual fracturing of the cartels and many small clashes between less stable and predictable groups. Murder rates jumped in municipalities like Tecate (from 19.8 to 50.6) and Tijuana (from 35.5 to 49.8) in Baja California, and Ciudad Juarez in Chihuahua (from 18.9 to 32.7). But again, there was no concomitant rise in border counties in the U.S. – a rise that would be expected if spillover violence were an urgent threat.

Given this reality, to prevent the deterioration of security conditions along the border, the proposal to build “great, great wall” and the order given by president Trump to fight head-on against “the cartels” are unfortunate and probably irrelevant. The border doesn’t need a new wall to contain cartels that are on the verge of extinction in the criminal world. The border requires a serious cooperative strategy, based on the co-responsibility of both countries in the problem of transnational organized crime, to protect US and Mexican communities and to reduce the number of homicide victims on both sides. The US can have a positive role – building a wall probably shouldn’t be part of it.