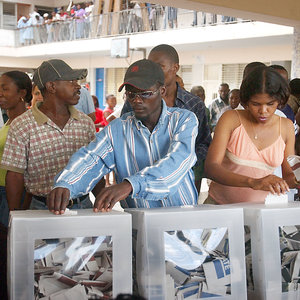 Haiti currently faces a political crisis without precedent. The country has a president with no clear constitutional provision for leadership after his term expires on February 7, 2016. A new Igarape Institute Strategic Note – Assessing Haiti’s Electoral Legitimacy Crisis – Results of a 2016 Survey  –  shows that there is a widespread cynicism among citizens that individual votes will not count under the current electoral administration.

The study presents the results of a national survey of 1,766 Haitian adults conducted between January 17 and 22, 2016. The publication follows a previous article on the Impact of Perceived Electoral Fraud on Haitian Voter’s Beliefs about Democracy.

The survey finds that less than 3% of respondents said they planned to participate in the January 25 2016 elections which were cancelled last week in the wake of mass street protests. 68% of respondents cited election fraud and corruption as the principle reason they would not participate in the voting process. Three quarters of Haitians said they would vote if they were confident the elections were free and fair. Also, nearly all respondents said they had made a choice about who they favored for president, with Jude Célestin as the most popular presidential choice.

Igarapé Institute’s analysis indicates that, given the history of repeated coup d’états in Haiti, it is absolutely crucial that President Martelly step down on February 7th, as planned. “This would help renew trust in the democratic process and demonstrate a commitment to the peaceful transition of power despite the lack of constitutional guidance for this specific situation”, says Robert Muggah, Research Director of the Institute and the publication’s co-author.

State University of New York professor Athena Kolbe, the report’s lead author, adds: “Though only two parties have formally contested the election through the legal system there is general consensus among Haitians that the elections were illegitimate. To proceed with the elections, the Elections Council has to be re-formed and new members must must establish their commitment to democratic elections.“