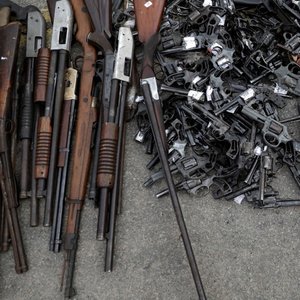 Gun violence hits all citizens with a heavy financial toll

As was made painfully evident following the mass shooting event in Las Vegas, the most visible costs are the premature deaths of victims, whether they are the intended target or innocent bystanders. Added to these costs are funerals for the dead, medical and rehabilitation services for the injured, and the investigations, legal fees and incarceration of the perpetrators. No less significant are the future losses associated with insurance payouts, lost earnings of the victims and the pain and suffering experienced by those who make it out alive.

Researchers have come up with several ways to measure the economic burden of gun violence. Calculating these costs is an inexact science: It is virtually impossible to put a price on the emotional agony of losing a loved one. Even so, specialists routinely count the costs of gun violence because juries frequently award damages for wrongful injury and death.

Most approaches adopt one of three methods: counting the medical expenses of treating injuries, estimating lost earnings due to premature deaths and gun-related injuries, and calculating the total burden associated with medical costs, lost productivity and additional expenditures linked to prosecuting gun crimes, including incarceration.

Not surprisingly, different methods yield different estimates of the costs of the violence.

First consider the scale of gun violence in the United States. There were more than 33,500 gun deaths in the US in 2014, according to the Centers for Disease Control and Prevention. A study in the journal Health Affairs found there are 70,000 to 90,000 gun-caused injuries in the country per year.

The Health Affairs study reviewed gun injury data between 2006 and 2014 and determined the medical expenses spent on treating victims totaled more than $2.9 billion a year. After researchers added lost wages, the estimated total losses shot up to $45 billion per year.

Another study, by Mother Jones magazine and the Pacific Institute for Research and Evaluation, applied a more expansive method, incorporating medical and rehabilitation costs, lost productivity, decreased quality of life and the costs of incarceration due to gun crimes. The estimated costs of gun violence in the US skyrocketed to $229 billion a year.

Brazil, which has one of the world’s highest homicide rates, suffers from a similarly high level of gun violence. More than 40,000 Brazilians die from gun violence. Over 17,000 suffer nonfatal firearminjuries annually. Part of the reason for the comparatively low injury toll is that many victims actually die before receiving emergency care.

Owing to the comparatively higher costs of treating victims and more elaborate insurance systems, the financial toll of gun violence is higher in developed countries than outside of them. For example, applying a methodology created by the World Health Organization, one estimate determined that the direct medical costs of treating gun injuries in Rio de Janeiro amounted to $88 million a year.

The researchers found that because bullets shatter bone and shred tissue, gun injuries were up to three times more expensive to treat than knife injuries. To be sure, the study significantly undercounted the overall economic burden of gun violence.

When the full cost of Brazil’s gun violence epidemic is accounted for, then the economic burden grows a hundredfold. If one includes the number of days the injured spent in hospital, the time victims are away from work, and the years of productive life lost to death and disability, then the costs careen upward.

Recall that gun-related injuries are especially concentrated in the young and most productive segments of Brazilian society. A study from 2008 estimated that gun violence in Brazil accounts for as much as $10 billion a year — 0.5 percent of the country’s annual gross domestic product at the time. Again, this figure surely underestimates the total costs.

Gun violence constitutes a tax on all Brazilian citizens — and a costly one. Quite apart from deaths and injuries, it contributes to brain drain, undermines public services, discourages investment and decreases property values.

Yet the costs are underappreciated in Brazil, one of the world’s top firearms producers.

As a small group of Brazilian politicians known as the “bullet caucus” considers expanding access to firearms for all manner of public officials, they would do well to recall that gun ownership is a privilege, not a right. And this privilege, as evidence shows, will neither reduce the gun violence nor make communities safer. What it does, however, is trample on the most sacrosanct right of all — the right to life.