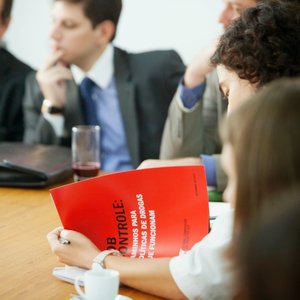 Ruth Dreifuss, former president of Switzerland and member of the Global Commission on Drug Policy is in Brazil to seek increased Brazilian governmental and civil society engagement in drug policy reform.

Dreifuss, in Brazil for a series meetings related to drug policy reform, will participate in a conversation with drug policy experts on Wednesday, April 15th at the Igarapé Institute in Rio. The meeting will focus on Brazilian involvement in championing a more progressive approach to domestic and international drug policies.

The conversation will highlight the Global Commission on Drug Policy’s report: “Taking control: pathways for drug policies that work,” and aims to align the present discourse and global mobilization in the area of drug policy reform from now until April 2016, when drug policy will be the subject of a Special Session of the United Nations General Assembly (UNGASS).

After Rio de Janeiro, Dreifuss travels to Brasília, where she will participate in a series of meetings with students, members of Congress, ministers and diplomats.

The first scheduled event in Rio is an opportunity for experts and journalists to better understand the dimensions of the global debate on drug policy, to discuss what may be expected of Brazil in the upcoming United Nations special session and to hear the recommendations of the Global Commission.

The Igarapé Institute is also releasing a portfolio of drug policy sources, which aims to serve as a media resource for journalists covering drug policy and related themes. A number of these experts will be present at the April 15th event.

ABOUT THE GLOBAL COMMISSION REPORT

The Global Commission report presents five recommendations with which governmental and civil society actors can develop and implement more humane and efficient drug policies. An English version of the report was released at the Museum of Modern Art in New York.

Put people’s health and safety first. Instead of punitive and harmful prohibition, policies should prioritize the safeguarding of people’s health and safety. This means investing in community protection, prevention, harm reduction, and treatment as cornerstones of drug policy.
Ensure access to essential medicines and pain control. The international drug control system is failing to ensure equitable access to essential medicines such as morphine and methadone, leading to unnecessary pain and suffering. The political obstacles that are preventing member states from ensuring an adequate provision of such medicines must be removed.
End the criminalization and incarceration of people who use drugs. Criminalizing people for the possession and use of drugs is wasteful and counterproductive. It increases health harms and stigmatizes vulnerable populations, and contributes to an exploding prison population. Ending criminalization is a prerequisite of any genuinely health-centered drug policy.
Refocus enforcement responses to drug trafficking and organized crime. A more targeted enforcement approach is needed to reduce the harms of the illicit drug markets and ensure peace and security. Governments should deprioritize the pursuit of non-violent and minor participants in the market, instead directing enforcement resources towards the most disruptive and violent elements of the drug trade.
Regulate drug markets to put governments in control. The regulation of drugs should be pursued because they are risky, not because they are safe. Different models of regulation can be applied for different drugs according to the risks they pose. In this way, regulation can reduce social and health harms and disempower organized crime.

Dreifuss worked for nearly a decade in the Swiss Agency for Development and Cooperation before being elected to parliament for three terms. She served in various other roles in the Swiss government, including Minister of Health and President. Dreifuss was behind a major push for drug policy reform in Switzerland, focusing on the areas of drug addiction and HIV/AIDS prevention and placing Switzerland at the forefront of global drug policy reformers.

At the end of the 1980s, Switzerland had a considerable increase in the rates of injection drug use, together with an increase in infection rates by HIV. In response to the crisis, the country implemented a set of harm reduction policies focused on public health. The strategy adopted in 1994 included the treatment of addicts by the administration of methadone, without imposing the condition that users stop using drugs to enter the program; needle exchange, also inside prisons; and the creation of supervised injection rooms. In parallel, the government implemented a pilot program which included the prescription of heroin to users with a high opiate dependence. About three thousand problematic heroin users started to receive it for free. The government concluded that heroin-assisted therapy was associated with numerous improvements in patients’ health as well as the fall in rates of drug-related crime. The program also substantially reduced heroin use among the most compulsive users, cause a decrease in demand and affecting market viability. By dealing with dependency and taking the local trafficker out of the picture, the government made it more difficult for casual users to contact drug dealers.