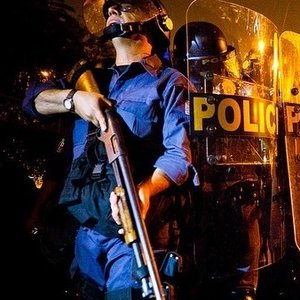 Gangsta’s Paradise: How Brazil’s Criminals (and Police) Use Social Media

Rio de Janeiro’s most wanted drug trafficker, Playboy, died in a hail of police gunfire at his girlfriend’s apartment this month. Photographs of his bullet-riddled body began circulating on the Internet within minutes of his demise. So did an audio recording suggesting that he “left the scene alive, but arrived to the hospital dead.” His assassination is yet another pixel in Brazil´s relentless war on drugs.

Social media is the new frontline in the fight between Brazil’s gangsters and police. This is not altogether surprising. After all, the country is one of the largest producers and consumers of online content in the world. There are over 70.5 million Brazilian Facebook users. Twitter, Instagram, and WhatsApp are all gaining in popularity. Brazil´s digital divide is shrinking fast.

Predictably, Brazilian criminal organizations are jumping on the digital bandwagon. While not as active as cyber cartels and digital gangs in Mexico, local drug trafficking groups are avid Facebook and Twitter users. They use social media like most other criminals – to intimidate rivals, show off their spoils and sell their product, as recent high-profile police sweeps in Rio de Janeiro’s Serrinha and Cajueiro favelas have highlighted. Real world disputes between gang factions are migrating into the digital realm, opening a window into the gangster lifestyle. Despite the risks of exposure, many gangsters are not shy about uploading incriminating content to the web, including Youtube and SoundCloud videos.

Meanwhile, Brazil’s federal and state police are resorting to social media to track down and arrest criminals. Programa Procurados, a police hotline, uses WhatsApp and other interactive platforms to solicit tips from citizens. Likewise, the civil police force’s Cyber Crime Repression Unit is mapping social media to build cases against drug traffickers and, more controversially, hacker collectives such as Anonymous.

Brazilian law enforcement and intelligence officials are resorting to more aggressive – and potentially rights-violating – tactics to catch online felons. Audio recordings posted online have been used to take down arms smuggling rings. More ominously, police have been accused of editing assault rifles into digital images in order to incriminate suspects.

Tools like WhatsApp are also routinely used by police to organize vigilante justice. Last month in the northern city of Manaus, police led a 72-hour operation that left more than 34 people dead. Soon after the crime, messages reportedly sent by police boasted of hunting bandits and warning that the “skulls” – a reference to police vehicles – would bring more death.

Like the traffickers they hunt, police officers use social media to mourn the death of colleagues and celebrate the killing of criminals. Photos and addresses of suspects are circulated without evidence of their guilt. The organized assassination of 19 people in São Paulo this month in what appeared to be police-led retribution was widely reported on social media. Photographs of corpses emerged instantaneously on blogs.

It is inevitable that Brazil’s real world challenges are mirrored in the virtual one. Yet the penetration of crime groups and police in Brazilian cyberspace has corrosive implications for basic civil liberties. Their presence has a chilling effect on the free exchange of ideas and open expression. While it is hardly surprising that Brazilian security forces are stepping up their activities in cyberspace, the lack of checks and balances on their activities is dangerous. Without more transparency, the credibility of the security forces will continue to deteriorate.

A careful balance needs to be struck when it comes to tackling drug trafficking groups online. The police must weigh the individual privacy of users against the public safety of the real and virtual community. There is a risk of violent overstretch in the state’s response. Heavy-handed approaches will almost certainly compromise the principles of net and real world freedom that Brazilians have fought so hard to secure.