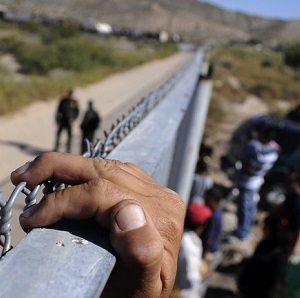 Europe’s refugee crisis is making headlines, but Latin America’s is just as alarming

The global migration debate is sharpening. There is widespread alarm over the explosion of refugees – which reached 21.3 million people in 2016 – together with growing angst over economic migrants. Today, at least one in 33 people on the planet is an international migrant. Now more than ever the determination of their status is shaping the direction of national politics and elections around the world.

The discussion is reaching fever pitch in the US, where the White House has issued controversial orders to restrict immigration – including asylum claimants – and round up and deport millions of so-called “illegals”. Meanwhile, reactionary nationalists in Europe are barricading the borders to keep out migrants and refugees making the desperate voyage from Central Asia, the Middle East and North Africa.

But there are other slower-burning migration emergencies that aren’t making international headlines: including those taking place in Mexico, within the so-called Northern Triangle countries of Central America, Venezuela and across South America.

A region of immigrants

Home to 632 million people, the Latin America and Caribbean region has long experienced interconnected and overlapping forms of voluntary and involuntary migration. Traditionally, cross-border and internal migrants moved to urban agglomerations and their sprawling peripheries. In some ways, Latin American urbanized before it industrialized.

Today, with roughly 80% of Latin Americans currently living in cities, the region is close to completing its rural-urban transition. By 2050, 90% of Latin American´s will live in cities and towns. While urban migration persists, tomorrow´s challenges are much more diverse.

Immigrants and asylum seekers have profoundly shaped the politics, economics and culture of Latin America. The region has experienced waves of Europeans, Africans, Asians and Middle Easterners over the past few centuries, whether as colonizers, merchants, refugees or slaves.

The effects of these massive population movements were seismic: Brazil is now home to the largest concentration of African descendants outside of Africa, Japanese descents outside of Japan and Syrians outside of Syria. Likewise, Argentina also has one of the world’s largest Syrian-Lebanese communities (3.5 million people).

Latin America has a well-earned tradition in welcoming refugees. Signed in 1984, the Cartagena Declaration on Refugees is a landmark in international law. As in other parts of the world, attitudes toward outsiders are hardening. For all their talk of open borders and sanctuary for asylum seekers, Latin American governments are comparatively less inclined to assume a larger burden of the world’s refugees.

As recently as last year there were hopeful signs that Argentina, Brazil, Chile and Venezuela would accept Syrian refugees. The rhetoric was not matched by action. For example, Brazil, a country of over 200 million people, has just 8,863refugees (of all nationalities) in the country. The Brazilian authorities promised to accept 100,000 Syrians but quietly withdrew their pledge last year. Argentina and Uruguay have accepted just a few hundred in the interim.

Quite apart from whether or not to accept more migrants and refugees from the Middle East and Africa, Latin America is experiencing a series of interlocking population displacement crises. The most spectacular of them is simmering in Colombia. Since the armed conflict started in 1964, the country has generated over 360,000 refugees and is home to the world’s largest population of internally displaced people – estimates put the figure at 6.9 million people. In spite of a stop-start peace process, the UN worries that the situation may be worsening, with many displaced people still in limbo.

Meanwhile, explosive criminal violence in Central America and Mexico has generated levels of displacement not seen since the civil wars of the 1970s and 1980s. The Northern Triangle countries of El Salvador, Guatemala and Honduras are among the world’s most violent, with cartels and gangs contributing to 31,219recognized refugees and likely many more internally displaced people. Aid groups in the region have declared the situation a “humanitarian emergency”.

There are other insidious forms of population displacement occurring away from public view. Facing a relentless political crisis and spiralling violence, tens of thousands of Venezuelans are seeking safer ground in Brazil and surrounding countries. More than 5,000 Venezuelans claimed asylum in Brazil this year alone. As a result, Brazil´s National Council on Immigration recently issued temporary residence permits. There are dangerous signals that these numbers could swell further still.

Meanwhile, literally hundreds of thousands of Mexicans, Central Americans and Caribbean residents – some of them ex-convicts – have been deported from the US, contributing to new vulnerabilities in areas of return. In 2016, an estimated 240,000 people were shunted into planes, trains and buses and sent packing. Many of these people lack support services on return to their home communities. Some of them also get involved in crime syndicates or gangs, contributing to a vicious cycle of displacement.

While there are many virtues of economic migration, the human costs and consequences of population displacement in Latin America are routinely swept under the carpet. The focus of governments across the region seems to be on containing rather than preventing displacement. Bold declarations by regional organizations and national governments are rarely backed by concrete action. Instead, responses to the crisis are reactive, consisting of temporary protection and humanitarian aid.

The scale of these invisible displacement crises requires a new pact by Latin American governments. Decisive and comprehensive responses are necessary. More positively, there are tentative signs of growing awareness about the severity of the challenges. Efforts by some governments to ensure rapid and free personal documentation services and facilities for naturalization are welcome. Some regional blocks and governments are also strengthening legal rights to employment as well as public–private schemes to promote access to labour markets. Needless to say, more preventive efforts are required, and urgently.