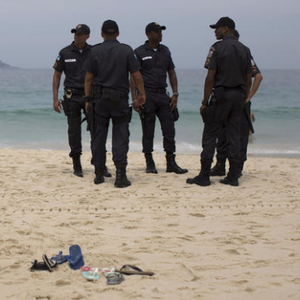 Can Brazil protect the Olympic Games and its own citizens?

“Brazil, you are our next target.” The tweet went unnoticed at first, lost in the aftermath of the devastating Paris attacks of November 2015. It was sent by Frenchman Maxime Hauchard, a self-declared jihadist and Islamic State affiliate. News of the post resurfaced in April this year after Brazil’s counterterrorism czar, Luiz Alberto Sallaberry, confirmed that he was taking such threats seriously in the run-up to the Olympic Games in August.

Brazilian security personnel are not the only ones preoccupied with security threats. In all, intelligence officials from 55 countries are setting up shop in Rio de Janeiro to monitor the digital and physical terrain. They have reason to be nervous. Last month Islamic State launched a new social media channel — Nashir Portugues — designed specifically to attract Portuguese-speaking sympathizers, using an encrypted messaging system. This is the first such effort in Brazil, according to the SITE Intelligence Group, which monitors extremist activities online.

Besides Islamic militants, Brazil’s intelligence agency, ABIN, has identified at least 1,600 hackers involved in more than 12,400 attacks on government domains since 2012. They are potentially less lethal than religious extremists, but still worrisome. Virtually the entire IT system for the Games has been migrated to the cloud instead of physical servers, improving efficiency but introducing new vulnerabilities to cyberattacks.

Of the hackers Brazil identified, only 10% were linked to cybercrime; more than half were associated with ideologically motivated hacktivists, the kind who might target the Olympics to embarrass the government and corporate sponsors as the hashtag #OpOlympicHacking implies. The hacking network Anonymous has already proved itself capable of disruption in Brazil. Anonymous temporarily shut down the official website of the Rio 2016 Olympic Games on May 11 and Brazil’s Ministry of Sports site the following day.

In order to counter digital threats, the government has set up a cybersecurity task force that includes ABIN, the military and the country’s Internet Steering Committee. In March, ABIN gathered representatives from 33 international intelligence agencies to review its cyberdefenses.

In addition to the cybersecurity efforts, Brazilian authorities are ramping up physical security. Around 47,000 police officers and 38,000 members of the armed forces will be deployed during the Games. This is more than twice the security contingent for the 2012 London Olympics, and Rio is likely to be the most militarized Games on record.

The cash-strapped Brazilian government allocated $100 million to the Ministry of Justice to bolster its security preparations; the Ministry of Defense has also invested hundreds of millions of dollars, including for anti-terrorism training. Three thousand marines are on standby. Police and military personnel have been dispatched to gain experience at the Boston Marathon, the Tour de France and U.N. General Assembly meetings in New York.

Security efforts on the ground will be coordinated by the federal police. The command and control headquarters in Brasilia is connected to the principal operations center in downtown Rio de Janeiro and multiple satellite offices at key Olympic installations such as Deodoro, Maracanã, Barra and Copacabana and will be equipped with closed-circuit cameras, surveillance balloons, drones and other technologies.

Civil liberties groups have voiced concern about Brazil’s sprawling surveillance infrastructure. They are worried that new anti-terrorism laws could stymie legitimate public protest. Brazil’s telecom regulator, Anatel, recently gave the military the green light to block cellular signals at the latter’s discretion. And there is concern that the armed forces are also preparing to deploy new surveillance platforms such as IMSI catchers, devices that mimic cellphone towers and can be used to capture personal information.

Brazil hopes to welcome more than half a million tourists for the Olympics, along with 10,000 athletes from close to 200 countries. Given the security preparations, it is likely that VIPs and most visiting foreigners will be well-protected. After all, Brazil has pulled off a handful of major events over the last decade, including the Rio+20 Conference (2012), a visit from Pope Francis (2013) and the FIFA World Cup (2014), with literally tens of millions of people safely passing through Rio de Janeiro.

Yet Brazil has a less stellar record of protecting its own, especially the poorest residents of Rio, many of whom live in the city’s most marginal settlements, thefavelas. A widely lauded public security program — known as pacification police units — has ground to a halt. According to Rio’s Institute of Public Security, between January and April of this year, there were 1,715 murders in the city, a 15% increase over the same period last year, with the violence concentrated in low-income areas. As police are redirected to Olympic duty, those crime statistics, and insecurity in the favelas, may rise.

As corruption scandals and the Zika crisis rumble on, Brazil is also under pressure to deliver a secure Olympic Games. At exceptional cost, it is taking its responsibilities seriously. However, the country also badly needs to prioritize long-term public security and safety strategies — especially for Rio de Janeiro’s most vulnerable populations, during the Games and after the Olympic torch goes out.