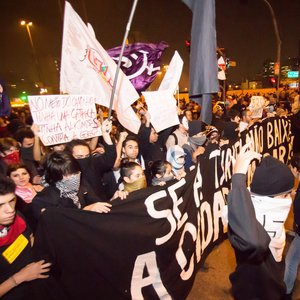 Earlier this month, public demonstrations turned violent in São Paulo, Rio de Janeiro and other Brazilian cities. It started out innocently enough: people initially gathered peacefully to march against yet another hike in public transportation fares. But the demonstration quickly dissolved into chaos. Harrowing images of masked military police corralling protesters with tear gas and batons were splashed across national media outlets and social media feeds. Once again Brazil’s security forces were accused of using disproportionate and excessive force.

Brazil has been here before. In 2013, the military police responded in similar fashion to student protests launched in the wake of a modest price hike in bus fares. The crackdown by police ignited what quickly became one of the largest popular protests in the country’s history. Then, as during the more recent protests, Brazil’s military and civil police forces were over-stretched and on edge. Today, however, the morale of the security forces is especially low due to widespread budget cuts introduced in the wake of a severe economic downturn.

Brazil’s government and police forces do not appear to have learned the lessons of recent (or ancient) history. Between June and August 2013, protests went viral and led to months of real and digital protest, including the destruction of public and private property. What began as a minor denunciation of increases in bus fares snowballed into a mass movement against political and economic corruption writ large. The protests constituted a new form of open empowerment. They were also met with ruthless force from Brazil’s security and police forces.

In 2013, as now, Brazil’s central intelligence agency (ABIN) and the Army’s cybersecurity command (CDCiber) surveilled citizens and politicians. Back in 2013, police started arresting students suspected of curating Facebook pages associated with Black Bloc methods. Research on the Black Bloc by the Igarapé Institute and the SecDev Foundation in 2013 detected a relationship between the excessive use of force by police and the swelling of protest activity both online and off. Police surveillance of demonstrators and website curators sent a chill down the spine of civil libertarians in Brazil and abroad.

Yet this time the situation is even worse. The country is being rocked by a series of complex political scandals and the worst recession in a generation. Brazil, along with other countries across the Americas, is also in the grip of a major public health epidemic, including the still-baffling Zika virus. Politicians and public officials are distracted, concerned with preserving themselves or plugging holes. The repression of legitimate protest is barely even noticed in the national media. Civil liberties are under threat, and it’s hardly registering in the public consciousness.

Complicating matters, it is not just public security providers who are cracking down on protesters. Brazil’s burgeoning private security sector is getting in on the act. Private security groups such as ABESE are growing in influence, yet are subject to little oversight or scrutiny. Along with public security providers, they are also involved in surveilling Brazilian civilians without adequate checks and balances.

All democratic governments must struggle to reconcile two competing public policy priorities: for Brazil, this means balancing the reality of cyber threats to Brazil’s sovereignty and critical infrastructure – such as sky-rocketing banking fraud and other cyber-crimes like identity theft – while guaranteeing and safeguarding civil liberties and digital sovereignty of its citizens, through legislative or other means.

The good news is that Brazil is making some progress to protect basic freedoms online and off. The 2011 Freedom of Information Law (Lei 12.527/2011) guarantees a transparent mechanism through which civilians can request and receive information from government agencies and other public entities. The Center for Technology and Society (CTS) at the Getúlio Vargas Foundation is favorably inclined to the legislation, but also fears that the response time, quality and reliability of the information received varies wildly.

What is more, in 2013 the Brazilian Congress also succeeded in passing a landmark “digital bill of rights,” the Marco Civil da Internet. It emerged after a prolonged (and participatory) multi-stakeholder process. The Marco Civil sets out basic principles governing the neutrality and use of the Internet in Brazil, as well as a framework for safeguarding the digital rights of citizens. It is lauded as a model which could be adopted by other countries and was championed at internet governance gatherings like NETmundial (2014) and the Internet Governance Forum (2015).

Notwithstanding promising gains, these initiatives are coming under threat. Over the past two years some members of Congress, federal prosecutors and, in some cases, judges, started pushing back. In December 2015, a São Paulo judge blocked access to popular instant messaging platform WhatsApp after its parent company, Facebook, refused requests to hand over the personal communications of a suspect involved in a criminal investigation. The service outage was temporary, but the judge’s action impacted nearly 100 million users.

Making matters worse, a draconian legislative proposal – dubbed the “Big Spy Bill” by its detractors – seeks to modify certain provisions of the Marco Civil. If passed, it will require Brazilians to provide personal information such as a home address and telephone number when visiting websites. Given Brazil’s litigious culture, the proposal would make citizens more vulnerable to charges of libel. The criticisms are coming hard and fast: the Institute for Technology and Society (ITS), an independent think tank in Rio, questions the bill’s constitutionality and describes it as regressive, unnecessary and dangerous.

All of this spells bad news for democracy and civic action in Brazil. The problem is that no one seems to be noticing. Since the government is struggling to pay its light and water bills, the debate on digital freedoms is taking a back seat to what are regarded as more pressing problems. Eye watering corruption – especially the so-called Lava Jato (or “Car Wash”)scandal – is front page news. Brazil has a vibrant civil society and a well connected digerati concerned with real threats to digital freedom. But they are the exception and not the norm.

The reality is that many Brazilians, maybe most of them, are not especially preoccupied with these curbs to their digital freedom. They are getting accustomed to the “new normal” in which physical movements and digital expression are  circumscribed by a state busy securitizing cyberspace. The question now is whether citizens will wake up only after it’s too late.

In the absence of other solutions, some technology-minded activists have taken the matter into their own hands — developing mobile apps such as Vigilante, which allow users to film and anonymously upload geo-tagged video and audio of observed police abuse. Another example is the work of Meu Rio, a Brazilian NGO using technology to improve the accountability of elected officials and influence public policy. Such tools in the hands of the public, along with increased use of body cameras by police and security forces themselves, can increase transparency while reducing the frequency and severity of police over-reach.

Brazil will be back on the world stage soon when it plays host to the Olympic Games later this year. It is very likely that protests will continue, and perhaps escalate. Given mounting frustrations, protesters are increasingly emboldened to take on the police and security forces over perceived injustices. It is not just middle-class students on the front lines, but the urban poor such as the residents of Vila Autódromo who were forcibly evicted to make way for the building of sports infrastructure. The country might well need to fall apart some more before it can put itself back together again.

By Nathan B. Thompson, researcher at the Igarapé Institute
Opinion editorial published in 28 January 2016
Open Democracy