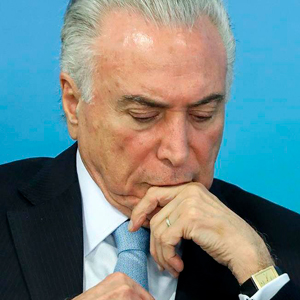 Brazil at the Liberal Crossroads

Since the end of World War II, Latin America has maintained a lukewarm stance toward the US-dominated liberal world order, and Brazil is no exception. But at the end of the day, Brazil has much more in common with the proponents of liberal internationalism than it does with other emerging powers.

RIO DE JANEIRO – The liberal international order is under assault. The West’s 70-year-old commitment to common security, open markets, and democratization is unraveling, and the world is moving rapidly from a unipolar world order to a multipolar one. This shift will have dramatic – and potentially dangerous – consequences.

Many Latin American countries that have benefited from the liberal order, particularly Brazil, seem indifferent to its possible demise. To understand why, one must revisit the establishment of the post-1945 by the US and its European allies.

The global liberal order’s architects constructed a web of international agreements, trade arrangements, and military alliances to achieve three basic goals: promotion of open trade, prevention of catastrophic wars, and discouragement of economic nationalism by replacing a centuries-old zero-sum arrangement with a positive-sum framework under which all participating countries could prosper.

The order they established rests on a set of rules and institutions such as the United Nations, the International Monetary Fund, the World Bank, the General Agreement on Tariffs and Trade (now the World Trade Organization), NATO, and the G20. Though they are not without critics, these entities were broadly successful in realizing the liberal order’s main goals.

Although some of the post-war institutions excluded Latin America, between the 1950s and the 1980s the region’s governments grudgingly participated in them. They resented the liberal order’s US-centric design, but tolerated it so long as its rules did not overtly infringe on national sovereignty.

This posture was not unexpected. Latin America’s engagement in global power politics was comparatively limited, and its leaders treated economic development as an internal matter. They were also preoccupied with resisting foreign intrusions by former colonial powers, not least the US.

US interventionism – including CIA-backed coup efforts in Guatemala (1954), Cuba (1961), Brazil (1964), the Dominican Republic (1965), Chile (1973), Nicaragua (1982), Grenada (1983), and Panama (1989) – regularly reinforced these concerns. As a result, although most countries in the region (with notable exceptions) aligned themselves with the West during the Cold War, they never fully embraced the US-led global order.

Latin Americans also deeply resented Washington Consensus policies of the 1980s-1990s which were often poorly implemented, and mandated “shock therapy” in the form of macroeconomic stabilization, sweeping deregulation, and privatization. At the same time, the spectacular growth of Asia, particularly China, had begun to shift the center of gravity away from the US and Europe.

While Cuba and the so-called Bolivarian countries mounted aggressive anti-American campaigns, the rest of Latin America began to chart a more autonomous course vis-à-vis the global order during the 1990s. This involved a frenzied process of building regional alliances to advance collective interests. Many such efforts were born weak and struggled to mature.

Still, after its founding in 1991, Mercosur, the fractious South American trade bloc, managed to ease tensions between Argentina and Brazil, leading to a tenfold increase in bilateral trade. And in 2011, Chile, Colombia, Mexico, and Peru established the more liberal-minded Pacific Alliance, underscoring their collective pivot to Asia.

But, aside from these uneven successes, the region remains weakened by mistrust, poorly integrated, and incapable of sustained growth. It is little wonder that its position on the global stage remains marginal.

Brazil, for its part, has alternated between supporting and criticizing the liberal order. For more than a half-century, Brazil’s Ministry of External Relations grumbled – not without some justification – about the country’s exclusion from the upper levels of international institutions, not least the UN Security Council.

Like others in the region, Brazil resisted US influence but nonetheless played by the rules of the game. That changed somewhat during the 2003-2010 presidency of Luiz Inácio Lula da Silva, who advocated for more “South-South” cooperation. Brazil also pursued energy, arms, and infrastructure deals with illiberal regimes, raising eyebrows in the US and Europe.

Even so, Brazil’s democratic institutions have demonstrated considerable resilience. Despite six years of economic decline and explosive corruption scandals, the country has a thriving free press and a strong independent judiciary, which could bring long overdue political and cultural changes to the country.

With a return to more balanced, transparent policymaking, Brazil could once again contribute constructively to building a more inclusive and representative international liberal order. After all, as one of the world’s largest democracies and a staunch supporter of multilateralism, Brazil has more in common with proponents of the liberal order than with China, Russia, or Turkey.

Moreover, Brazil’s elites are less insulated and hostile to globalization than in the past, and they increasingly accept that protectionist postures are counterproductive. And the country’s burgeoning middle class, many of whom have taken to the streets since 2013, will no longer tolerate rising living costs, mediocre public services, state capture, and rampant corruption.

If Brazil’s public prosecutors can sustain the ongoing “Lava Jato” (“carwash”) anti-corruption drive, Brazil will also have an opportunity to turn the page on its failing development model after the general election in October. To seize it, Brazilians will need to elect a president with a progressive reform agenda, not a right-wing populist such as Jair Bolsonaro.

For better and for worse, Brazil and the rest of Latin America are fundamentally connected to the liberal international order and its political and economic institutions. No one in the region should wish for a return to the pre-1940s disorder. And the so-called Beijing-Moscow consensus, built as it is on narrow economically minded motives, would be no less ruinous.

Brazil now has a tremendous opportunity not just to reshape its politics and economy, but also to play an active role in building a liberal international order fit for an evolving multi-polar world. The question is whether Brazilians will seize the moment.

Arminio Fraga, a former governor of the Central Bank of Brazil, is a partner at Gávea Investimentos.