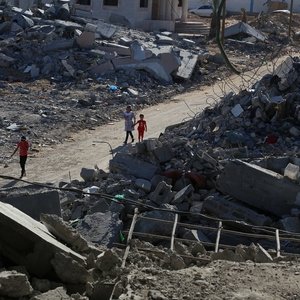 The United Nations Summit in September ushered in a new era of global development. There, 194 member states approved 17 new Sustainable Development Goals (SDGs) to replace the 15 year-old Millennium Development Goals. The SDGs are supposed to guide the world´s development agenda for the next decade and a half.

One of the singular achievements of this prolonged – and often contentious – process was SDG 16, focused on fostering “peaceful, just and inclusive societies.” But this ambitious goal, which includes targets to promote safety, the rule of law and transparent institutions, is already under threat.

Metrics around death are marked by controversy and great uncertainty

An Inter-agency and Expert Group set up by the United Nations Statistical Commission is charged with recommending a shortlist of indicators to monitor global progress in meeting the SDGs. In March, they will submit a final list of basic metrics, including those associated with peace, justice and inclusion.

And while they’ve made progress, the first target of SDG 16 – which calls for ” … reducing all forms of violence and related deaths everywhere … ” – has generated controversy. For a start, not all violent deaths are being treated equally. While most governments now collect and publish data on homicides, many are reluctant to reveal the human costs of conflict within their own borders. There are several reasons why they are uneasy.

Some national statistical office representatives believe that existing methods for counting conflict deaths are simply too flawed to be used for annual reporting. It is certainly true that measuring mortality is far from an exact science. But this is the case with all the SDG indicators – no matter whether for poverty, health, education, the environment, or for violence, rights and governance.

For example, the UK-based Overseas Development Institute has pointed out how official reports of the incidence of absolute poverty undercount by up to 350 million people. But no one is suggesting that we should give up measuring absolute poverty.

Murder data is difficult – but essential – to collect

Counting violent deaths is an especially thorny issue. Collecting homicide data, for example, is complicated by different definitions of murder, time periods over which data is collected, and methodological approaches. This is part of the reason why the UN Office for Drugs and Crime (UNODC) only started publishing national statistics on homicide in 2008.

Despite real improvements in data quality in some regions, there remains huge scope for improvement in homicide statistics, particularly in Africa. In 2013, for example, UNODC’s data indicated that Africa’s homicide toll lay somewhere between 50,000 and 140,000, which is a range so large that it is impossible to know whether homicides have increased or decreased across the continent.

Notwithstanding these and other data challenges, there is no suggestion that the UN Statistical Commission exclude homicide deaths. Nor should there be. The collection of data on murder needs to be improved, not abandoned. As the Secretary-General’s Data Revolution Report put it in 2014: without high quality data “…designing, monitoring and evaluating effective policies becomes almost impossible”.

Counts and estimates of conflict deaths, like estimates of poverty, inequality and homicide, are also subject to uncertainty. What makes them different, however, is that primary conflict data is collected by mostly Northern universities, research organizations and frontline human rights groups, rather than national statistical offices.

Data on conflict deaths is – not surprisingly – politically sensitive, especially among governments. It can reveal how many soldiers and citizens were killed, and whether rebels, but also political, military, police and civilian leaders, are complicit in war crimes. It is no accident that the US military used to proclaim that: “we don’t do body counts.”

A good example is the Uppsala University’s Conflict Data Program (UCDP) which has documented “battle-related deaths’ for every war affected country since 1989. UCDP searchers, like UNODC’s analysts, give “high” and “low,” as well as “best” estimates of violent death tolls. They also almost never count non-violent deaths associated with warfare.

Yet even if all methodological and data reliability concerns were resolved, some states would still argue against including a metric on conflict deaths in the SDGs. During the SDG negotiations, there were some diplomats who wondered whether war and peace could be considered development issues at all. Security issues, they argued, were the preserve of the UN Security Council, the Departments of Political Affairs and Peacekeeping Operations, and the Peacebuilding Commission.

There is no doubt that these UN bodies are important in preventing conflict and sustaining peace. The reality, however, is that they do comparatively little to address the so-called “root causes” of armed conflict. “Root causes” include: exclusionary politics, group inequalities, social injustice, systemic corruption and lack of state capacity to resolve grievances and protect citizens from violence. This is where development – and the SDGs in particular – will play a critical role in the coming decade.

Across the global development sector, a new narrative on the relationship between security and development has been gathering momentum. Since the late 1990s, the UN, World Bank and other international development agencies have argued that preventing conflict is a critical development priority. This is consistent with the growing consensus behind Paul Collier’s assessment of war as a process of “development in reverse”. SDG 16 explicitly acknowledges the logic of this new discourse.

The current collapse of the war-ravaged Syrian economy since 2011 is a particularly telling example of how armed conflict can dramatically reverse the developmental progress of a relatively prosperous middle-income country.

Scrutiny is unavoidable, irrespective of concerns over sovereignty

There is one further objection to including an indicator on conflict deaths in the SDGs. It has nothing to do with worries about methodology or disagreement over whether or not war is a development issue. Rather it derives from deep-seated concerns about national sovereignty, and the fear that including conflict death metrics in the SDG process could lead to interference in domestic affairs.

These concerns were occasionally expressed by member states and some civil society groups during the SDG negotiation process. Some governments worried that data on conflict deaths are far too sensitive to be shared in wartime. Still others felt that these new targets could impose much-disliked “conditionality” programs—particularly on fragile and conflict-affected states.

It is easy to imagine why the Syrian government – or indeed any regime involved in the killing of huge number of civilians – would prefer avoiding any scrutiny of their repressive behavior. Yet the reality is that this is going to happen anyway. In a world awash with social media data, satellite imagery, and widespread access to the internet and cell phones, more and more information on the human costs of wars is becoming internationally available at ever lower costs. What is more, the new 2030 development agenda already has peace at its center. Its overall success depends on holding governments and non-governmental organizations accountable.

Reliable data is needed to set priorities, monitor investments and measure impacts. But the pursuit of the ideal should not become the enemy of the good. Even limited amounts of reliable data can provide surprisingly useful insights for policy and programming.

In the 1990s, for example, many policy makers and researchers assumed that the number of wars being waged around the world was increasing. But new conflict datasets came on-stream and revealed that conflict numbers were actually declining – more conflicts had ended then started during that decade. Since almost no one recognized that the decline had taken place there was no reason for policymakers and researchers to ask why this was the case – a question that could have produced some interesting answers.

With access to new conflict data in the early 2000s, scholars were able to demonstrate statistically how effective peace negotiations had become in stopping wars. The evidence also showed how the deployment of peacekeepers contributed positively to stability and reduced the risks of conflict recurrence.

The new datasets also revealed that terrorist campaigns and insurgencies succeed only very rarely– around 10 per cent of the time according to some estimates. Would-be insurgents might well have had pause for reflection had they known that the odds of success before embarking on a war were so bad.

At the moment, most research groups are focused on counting the direct deaths of combatants and civilians – i.e., those that result from violent injuries. But direct deaths make up only a minority of all war-related deaths. The real killers, especially in wars in very poor countries, are “indirect” deaths – i.e., those arising from war-exacerbated disease and malnutrition. These can exceed direct deaths from injuries by a factor of four or more.

The challenge in estimating indirect conflict deaths is that simply counting the number of people who die from disease, malnutrition and other causes during wartime is not enough. This is because, especially in very poor countries, large numbers of individuals would have died from disease and malnutrition even in peacetime.

But with fatality data collected by nationwide household surveys using “verbal autopsies”, it is possible to distinguish the elevated mortality rate experienced in wartime, from the lower pre-war or “baseline” mortality rate. The difference between the two is the “excess” death rate – i.e., the death rate from disease and malnutrition, as well as injuries, attributable solely to the war. Knowing the excess death rate, and knowing the war-affected country’s total population with reasonable confidence, calculating the overall excess death toll becomes straightforward – at least in principle.

Not surprisingly, there remain major questions about how to scale-up and organize a genuinely global data collection movement to count direct conflict deaths and estimate excess deaths. Monitoring systems and surveys designed to estimate both direct and indirect deaths may well become part of the SDG 16 at some point in the future.

There is great interest in the research community in improving methods for estimating direct and indirect conflict deaths—including the innovative work of Human Rights Data Analysis Group (HRDAG) and the Center for Research on the Epidemiology of Disasters. New developments in information technology are also creating opportunities for innovative data collection and refinement on the human costs of war.

A data-driven drive towards development through peace

The new SDGs were designed to be bold, achievable and drive an evidence-based approach to development. SDG 16 meets all of these criteria and reflects a growing consensus on the ways in which security and development are intertwined.

It would be a grave mistake at this stage for governments to reject tracking conflict deaths, arguably the single most important metric of a just, peaceful and inclusive society. If they are left out, then the world will be confronted with the curious spectacle of a goal for peace that ignores war almost completely.

By Robert Muggah, research director of the Igarapé Institute, and Andrew Mack, fellow at the One Earth Future
Oped published in 20 January  2016
Humanitarian Practice Network