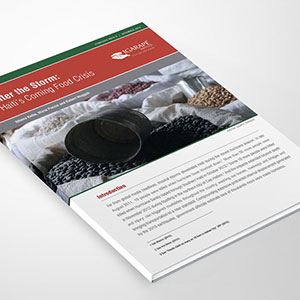 Far from global media headlines, tropical storms devastated Haiti during the recent hurricane season. In late August 2011, 19 people were killed when hurricane Isaac touched down.1 More than 50 more people were killed when Hurricane Sandy ripped through Southern Haiti in October 2012.2 Some 16 more people were killed in November 2012 during flooding in the northern city of Cap Haitien.3 And the impacts extended beyond death and injury: rain triggered mudslides throughout the country, washing out homes, roadways and bridges and bringing transportation to a near standstill. Compounding extensive protracted internal displacement generated by the 2010 earthquake, government officials estimate tens of thousands more were made homeless.